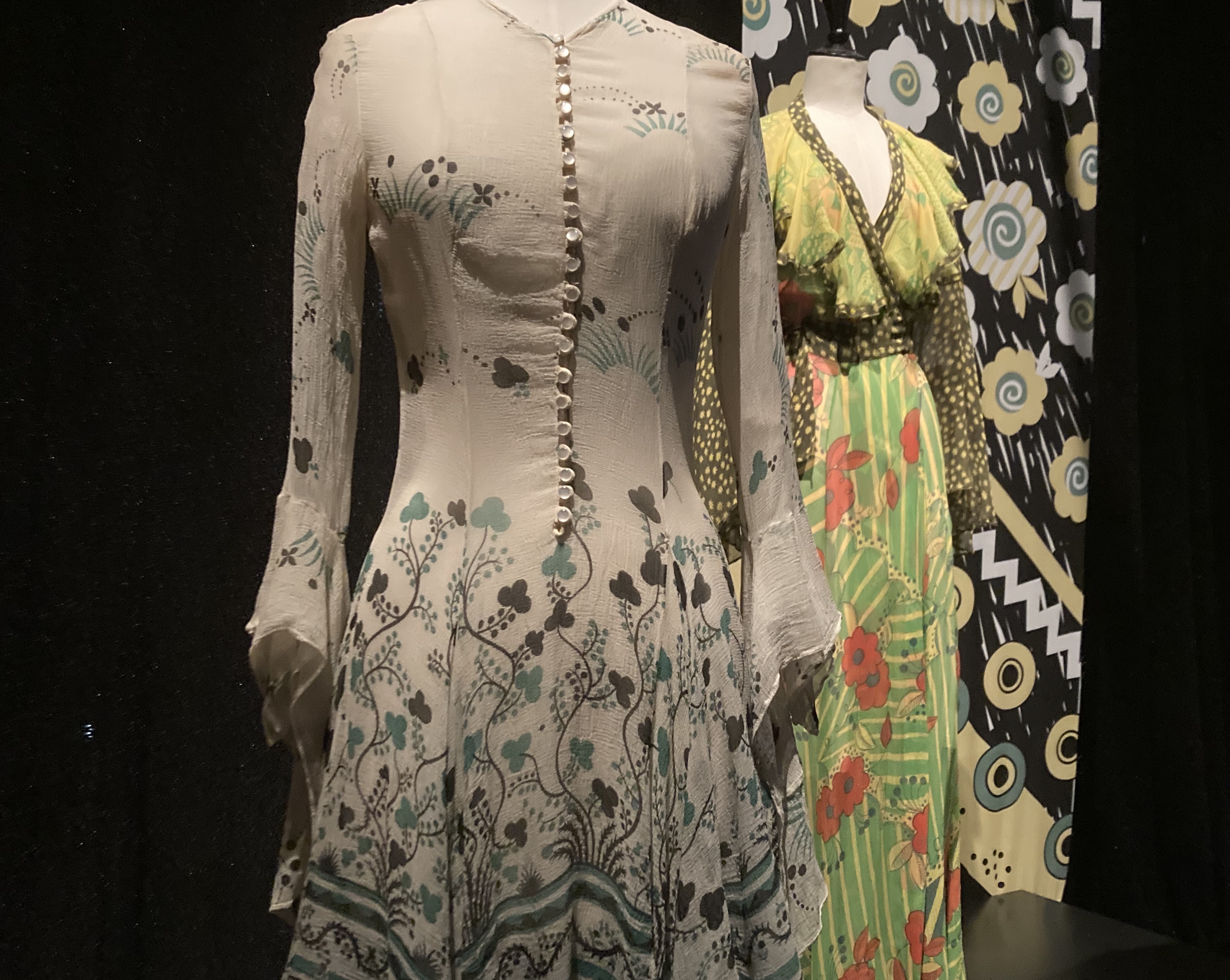 Click below to see a slide show of the show’s beautiful exhibits.

A fashion exhibition has arrived to Prato, a town just northwest of Florence, which can be  reached in just 15 minutes with an inexpensive train ticket. MR & MRS CLARK, OSSIE  CLARK AND CELIA BIRTWELL, FASHION AND PRINTS 1965-74 is being held in Prato’s Museo del Tessuto (Textile Museum), a venue known for hosting temporary exhibitions having to do  with historical fabrics and fashion. The exhibition is also showing in Milan at Fondazione  Sozzani, from January to April 2023.

“Mr & Mrs Clark” is a retrospective showcasing the work and talents of Ossie Clark and his wife Celia Birtwell. The couple was married from 1969 to 1974 and worked together, in  London, in harmony, as one was a clothing designer and the other was a designer of textiles.  Clark created one-of-a-kind pieces, most famously dresses, using the incredible and intricate prints made from silk and chiffon that Birtwell conceived.

Although Mr. & Mrs. Clark’s dresses are the main attraction of the exhibition, multimedia aspects add excitement in the form of photos, videos, music, original sketches, and  other forms of memorabilia. An important part of the show is the exclusive viewing of a Celia Birtwell interview.

The display showcases 40 dresses for visitors to admire. Guests may notice how Ossie  Clark gathered his inspiration from the 1930s and 40s and notes of flower power, with many  of the textiles being transparent and barely covering cleavage at times. This style left Ossie  with the nickname “King of King’s Road.” The couple was also interested in popularizing gowns that could be worn in the daytime, changing the idea of an “evening gown” as the world knew it.

The couple garnered a lot of attraction within the pop scene because of the modern,  innovative style of their designs. They began to dress celebrities such as Mick Jagger, Keith  Richards, Jimi Hendrix, and Marisa Berenson. Their designs hit the red carpets and fashion  runways, and Mr. & Mrs. Clark were unstoppable.

Ossie’s and Celia’s faces may also seem familiar to some, as they are the main subjects of the famous portrait painting titled Mr and Mrs Clark and Percy (1971) by David Hockney. The artist painted the pair in his home in Notting Hill, further portraying how much of a power  couple the Clarks were while they were married. The work is a contemporary retelling of the  masterpiece by Jan Van Eyk, the Arnolfini Portrait (1434), with Celia Birtwell dominant in  contrast to meek bride of the Renaissance piece, and infidelity symbolized in the depiction of  Mr. Clark, another dissimilarity. The couple, in fact, divorced in 1974.

The public will be able to visit and experience Mr. & Mrs. Clark’s fashions during the Museo  del Tessuto’s normal visiting hours. This creative and collaborative exhibition is not one to miss. (olivia synek)