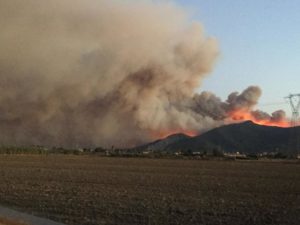 A deliberately set fire that burned close to 1,500 acres of olive trees and pine trees in the forests of Monte Serra in the Monti Pisani (the hills of north central Tuscany), caused 700 people to be evacuated from their homes. The fire developed around 10 pm on Monday, Sept. 24.  Due to the strong winds averaging 20 miles per hour coming from the North, the fire rapidly spread to Montemagno. Fire brigades from Pisa and Emilia-Romagna intervened along with a S64 helicopter with maximum water capacity. The strong winds are the biggest issue since there are no signs they will be diminishing.

Lots of uncertainty remains as to what houses were spared from the fire, most evacuees must wait to find out the condition of their homes. Although no citizens have been injured, three seniors have been taken to the hospital as a precaution for smoke inhalation.  The governor of Tuscany, Enrico Rossi, has declared a state of emergency

The intense flames were visible from miles away, including the city of Pisa, and many inhabitants were able to flee. Many escaped to the street and migrated towards the town centers of Calci and Vicopisano. The Calci monastery and museum escaped the flames, although fields around the complex were scorched.

This blaze is much larger than the 2011 forest fire in the same area which affected a little over 100 acres. Officials are determined to discover the causes of the disaster since it has affected so many people while forces are trying to contain the fire from spreading to nearby villages and towns,