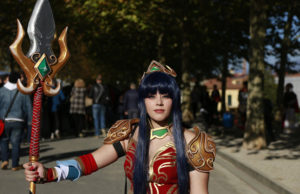 The biggest comic book festival in Europe returns to Lucca for a remarkable 51st time on November 1, 2017. The actual name of the event is “Lucca Comics & Games” because it is separated into those two distinct categories. This year, the festival has a duration of five days (November 1 – 5), an occurrence that has happened only one other time in its history.

Expect comic book fans from all over the world to come dressed elaborately as their favorite character. This year’s theme revolves around “heroes” and instills the central message that “everyone can be a hero for a day.” It also comprises yearly festival staples such as cosmetic cosplay, a cartoon music contest, and a Dungeons and Dragons tournament. One day tickets are €19 and a entire five day pass is €65, both of which are available at the door (piazza San Romano 1).

Arguably the most popular event of the whole festival is held on November 1 and 2.  Participants have the opportunity to dress as their favorite comic book, TV show, movie or video game character. A “parade” then commences and the entrants go up on stage and have a time limit to present their character; either by acting out a scene or simply just standing there. Finally, the jury then selects winners and presents the awards.

Some of the prizes include best costume, best video game character, and best choreography. Many different themed cosplay stages will be set up every day at different times but the actual cosplay race (parade) featuring all finalists will take place at 2 pm on November 5 at Baluardo S. Donato.

Various bands enter an online video of their performance to the festival committee, which selects four qualifiers to play for the top spot during the event itself. Musicians are dressed up and named after their favorite cartoon, show or movie. This year’s showcase features Ghostbusters, Team Rocket (Pokemon) and Alvin and the Chipmunks as themed cover bands.

After the groups play, a jury selects a winner and grants them an invitation back to the festival next year to perform on the main stage. The Cartoon Music Contest takes place at 4:15 pm on November 2  (Baluardo S. Donato).

Lucca Comics is hosting an array of pioneers in both comics and video games this year including Timothy Zahn, Robert J. Schwalb, and Bill Slavicsek. Schwalb and Slavicsek are both most notably known for their contribution to role-playing games such as Dungeons and Dragons. Both men are former game designers for D&D but they are also hailed as experts in other areas; Slavicsek’s work called A Guide to Star Wars was actually published by Del Rey (which is owned by LucasFilm and Disney Studios).

Arguably the most famous of the trio is Timothy Zahn, a New York Times bestseller and author of Star Wars: Thrawn. It is compiled into three books that take place in the same universe and the same time as the movies but revolve around a separate central character. All three artists will be available for autograph signing multiple times every single day of the festival at the Carducci Gaming plaza.

Some interesting features include a realistic reconstruction of US military headquarters from the Second World War, and actual military vehicles used in the war.  A jumbo screen will allow viewers to get a first-hand look at the gameplay featured in COD: WWII.

A second pavilion is open to guests for the game Destiny 2, which was just released in September and has already received very high praise. This pavilion will display many screens open to the public for free gameplay.

Comic aficionado or not, most people welcome the chance to be a hero for just a day.  The opportunity of seeing the excitement and passion of the festival’s biggest fans is in itself worth the price of admission. (michael samson)