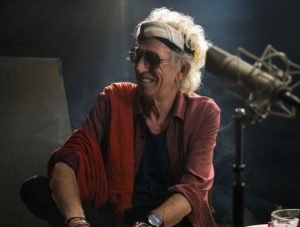 ‘The Origin of the Species,’ a documentary on Keith Richards presented at the festival

The annual Lucca Film Festival is back this spring celebrating the best of the best in European and international film with screenings, exhibitions, and special events in the coastal towns of Lucca and Viareggio April 2 – 9. Since entries are in their original language with either English or Italian subtitles, the event has appeal to an international audience.

Three time Oscar winner Oliver Stone will also be in Lucca to receive the Lifetime Achievement Award and conduct public conversations on working in the film industry.

Another highlight of this year’s event is the Effetto Cinema Notte (Day For Night,) will transform Lucca into a giant movie lover’s playground, concluding with a grand finale the evening of April 8. The town will be divided into five different neighborhoods, each hosting a genre: cult classics, action films, music movies, 80’s hits, and fairytales. Along with the screenings, visitors will enjoy live music and performances scheduled around fan favorites like Trainspotting, La Dolce Vita, Coyote Ugly, and Dead Poets Society to name a few.

Every year the festival pays tribute to a group of successful filmmakers and actors from around the world, along with special screenings and public talkbacks. There are two competition categories; both a Feature Film and Short Film race that with over 20 films in either category submitted from all the around the world, with prizes ranging from 500 to 3000 euros.

Special guests from past years have included stars such as Twin Peaks creator David Lynch, and this year the festival includes a retrospective on the work of Oliver Stone.

On the evening of April 8 at Cinema Astra in Lucca he will personally present Alexander (2004) – an epic star-studded action movie chronicling the life of Alexander the Great. Stone is a successful director and screenwriter who was the mind behind films like Natural Born Killers (1994), Wall Street (1987), and most recently Snowden (2016). He has also penned critically acclaimed gangster flick Scarface.

Also being celebrated this year is Finnish screenwriter and director Aki Kaurismaki, and French director, screenwriter, and film critic Olivier Assayas. Kaurismaki will receive the Lifetime Achievement Award and an honor from the Giacomo Puccini Foundation for his work on prolific films such as The Man Without a Past (2002), Le Havre (2011), and Lights in the Dusk (2006). The first Italian screening of Kaurismaki’s most recent film The Other Side of Hope will take place on April 2 at Lucca’s Cinema Astra, just days before its European release.

British director Julian Temple will preside at the Italian premiere of his latest effort, The Origin of the Species, a documentary on Keith Richards, on April 3.

Olivier Assayas, who was recently honored at the Cannes Film Festival, will be receiving a Lifetime Achievement Award. His new psychological thriller Personal Shopper, starring Kristen Stewart, will be specially shown on April 9 at the Cinema Moderno in Lucca.

Other honorees include actress Valeria Golino, who will participate in a colloquium on juggling being an actress, a director, and a producer. Actors Willem Dafoe and Giada Colagrande are being honored for their considerable contribution in the international film sphere.

British director Julien Temple, who will also be receiving the Lifetime Achievement Award, has the noteworthy job of introducing one of the two art exhibitions that coincide with the festival. Temple’s work highlighting punk and rock music through his career – with films like The Filth and the Fury, a 2000 biopic of the Sex Pistols, and the cult classic Absolute Beginners starring David Bowie – make him the perfect candidate to introduce PunkDada Situation, open from April 3 to May 1.

The show, curated by Alessandro Romanini, celebrates 40 years of Punk – the avant-garde cultural movement that overtook the 70s and 80s and transformed the expressive language of art, music, and film forever.

This year’s festival is guaranteed to be a hit! For more information on tickets (including options for single event tickets and day passes) and a full schedule of the week’s events visit luccafilmfestival.it. (tessa lucia debole)