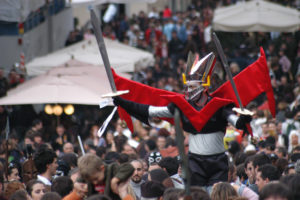 Join fellow comic lovers for a weekend of games, music, movies, and art at the Lucca Comics & Games 2016 Festival, hosted this year by the Tuscan town from October 28 through November 1.

Lucca Comics & Games is the biggest Italian festival dedicated to comics and video games. Today, it holds the title as the largest comic festival in Europe and third in the world.

As a logo which reflects this year’s theme, “Gold,” writer Zerocalcare (known for “Profezia dell’Armadillo and “Un polpo alla gola”) has created a powerful image — a new woman superhero decked in gold jewelry with her hands holding up a five and a zero, symbolizing the Festival’s 50th anniversary.

This year will offer both a commemoration of the past as well as a showcase for upcoming artists.

Expect to find multiple costume contests, including one hosted by 20th Century Fox with a theme from the beloved Assassin’s Creed franchise. Perhaps the most exciting one for participants is the “Be a Superhero:” the winner will become the star of their very own original comic book, crafted by professionals in the industry.

The “Games” section will include the popular Dungeons & Dragons. Tony DiTerilizzi, illustrator of “Planescape” will be meeting fans in Palazzo Ducale, along with David “Zeb” Cook, the principal writer for the second edition of “AD&D.” Jeremy Crawford, the author of the fifth edition of D & D, will DM (Dungeon Master) an original adventure from the Adventurers League to be brought to life by players at the festival. On Sunday, October 30, 100 players and 20 dungeon masters will sit down to play a huge game of D&D, marking a historic moment for the game in Italy.

The comic portion features special guests: Eisner Award Hall of Famer Frank Miller, known for some of the most praised runs of both Daredevil and Batman, will be signing at a special booth aptly named the “Batman Village.”

Also in attendance will be Andrea Sorrentino, an Italian artist who has worked for DC and Marvel.  His first project with Brian Michael Bendis entitled Old Man Logan, a section of Secret Wars that expands upon the original 2008 comic of the same name, is the inspiration behind the last outing for Hugh Jackman as Wolverine in the upcoming film Logan.

The event will welcome comic artists from around the world, like Frank Cho from the U.S., who began working for Marvel and DC Comics after creating the series “Liberty Meadows.” Joan Cornellà, known for his comic Fracasa Mejor and his work for the satirical magazine “El Jueves,” is arriving from Spain. The last international guest is Casty, who created the series Cattivik and Lupo Alberto and began drawing for Topolino (Mickey Mouse), creating his own rendition of the classic comic figure.

“Lords For the Ring,” seven artists celebrating the work of Tolkien’s epic franchise, will present 14 images influenced by Tolkien’s Lord of the Rings series. The art encompasses the vast work that Tolkein created, ranging from scenes from The Silmarillion to the renowned trilogy.

The festival is open daily from 9 am to 7 pm and tickets range from €15-20 per day, depending on the schedule. For the complete program, and to see photos and videos from the 2015 series, visit www.luccacomicsandgames.com. (francesca billington & carson cecil)