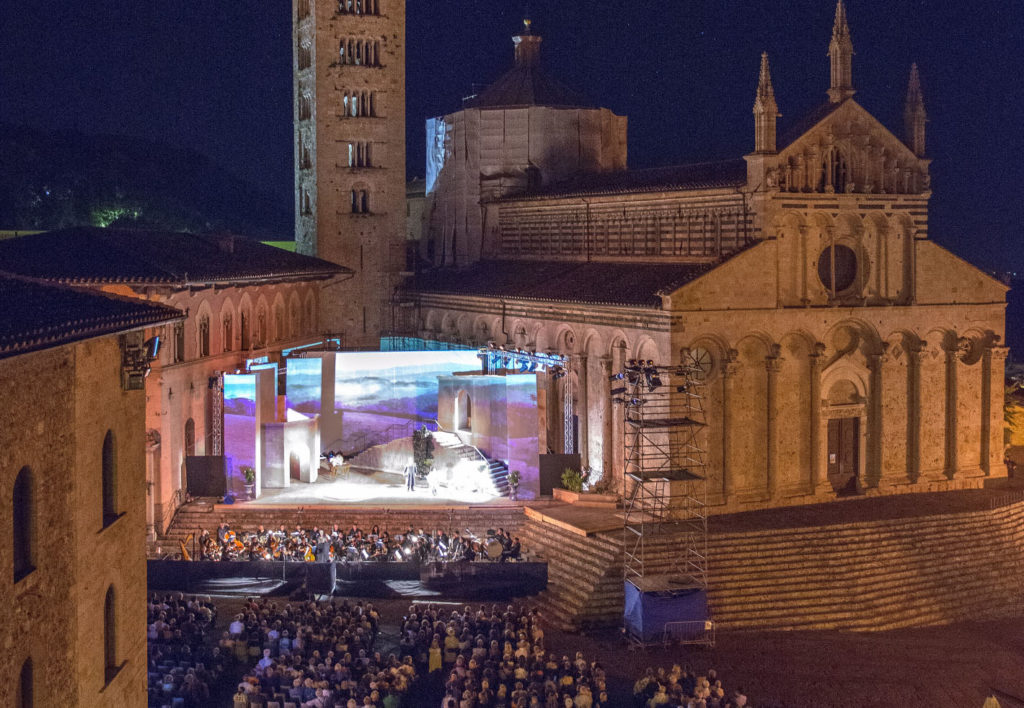 Among the numerous musical performances scattered throughout the Tuscan summer, Massa Marittima’s Lirica in Piazza has set itself apart as one of the most important operatic events in the region. The festival returns for its 34th year on August 3-5 and is held in Piazza Garibaldi, a stunning, star-shaped medieval square that houses many of the city’s most important historical buildings — among them, Massa Marittima’s 13th century Cathedral of San Cerbone. Since 1985, Lirica in Piazza has transformed the space into an open-air theater for a three-day opera concert series, combining classic operas with modern multimedia technology, original sets, and lighting effects specially created for the location.

This year’s program presents three of the most beloved stories in the operatic tradition, all beginning at 9:15 pm. On August 3, the festival will open with Giacomo Puccini’s La Boheme, directed by Sandro Corelli and conducted by Claudio Maria Micheli. Set in Paris during the 1830s, La Boheme follows the tragic love affair between Mimí and Rodolfo, two bohemians facing poverty and illness in the city’s Latin Quarter. The opera was first performed in Turin in 1896 and has since become a classic of Italian opera, as well as one of the most frequently performed operas worldwide.

The following evening sees Giuseppe Verdi’s Aida, directed by Gianmaria Romagnoli and conducted by Maurizio Morgantini, take over the piazza. First performed in Cairo in 1871, Aida tells the story of an Ethiopian princess held captive in ancient Egypt, where she and Egyptian general Radames secretly fall in love. When Radames is called to lead the war against the Ethiopians, however, she must choose between her passionate affair and her love for her country.

Lastly, the festival will present Gianmaria Romagnoli’s interpretation of Mozart’s The Magic Flute on August 5. This opera follows Prince Tamino and bird-catcher Papageno who use their magical musical instruments to rescue Pamina, the daughter of the Queen of Night and the captive of the evil Sarastro. Since debuting in Vienna in 1791, during Mozart’s last days, the opera garnered international praise and is still considered one of the greatest ever written.

Tickets for Lirica in Piazza range from €10 to €50, with reduced fees for individuals buying tickets to two or more performances. Purchases can be made at boxofficetoscana.it or ticketone.it. (Lea Bourgade)