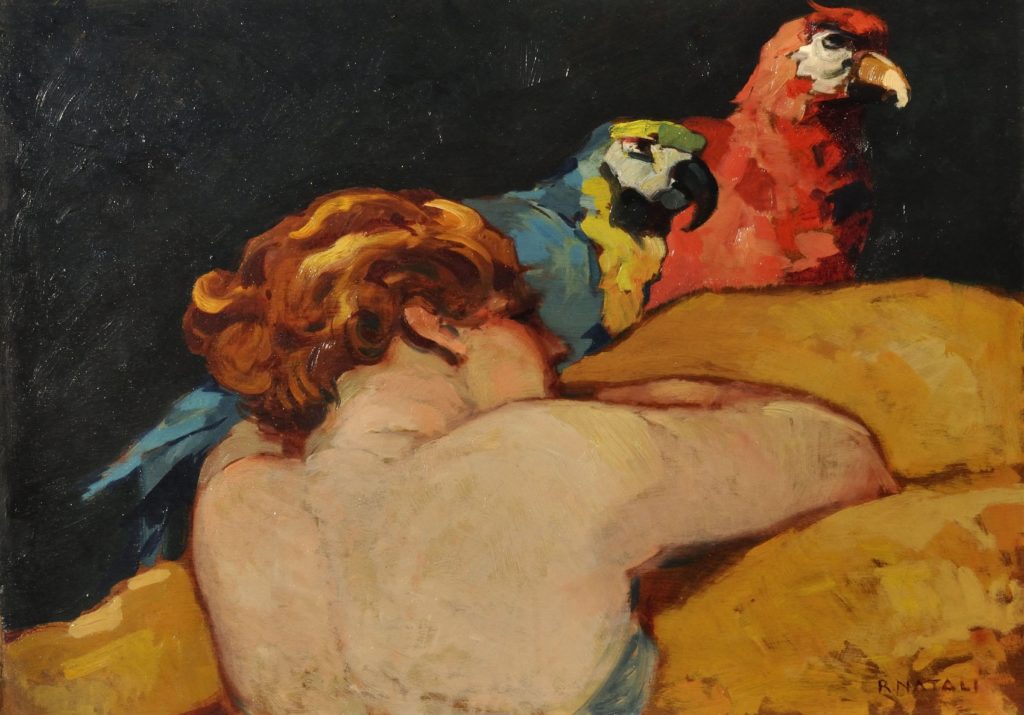 Tuscan weather is generally gorgeous in September. For those at the beach, or just looking for a way to pass the time during a quiet moment, why not take an artistic detour? The exhibition L’Eterna Musa in Viareggio makes a perfect cultural supplement to a relaxing day out of the city.

L’Eterna Musa exhibition is comprised of 40 works created between the 19th and 20th centuries, each depicting an extraordinary woman, whether she be peasant or noble, worker or housewife. On display at the Centro Matteucci per l’Arte Moderna in Viareggio until November 3, L’Eterna Musa explores how the art of painting has chronicled the transformation of female roles over time. Not only is there variety in the female identities on display, but also in the styles of painting. This is not too surprising, considering the number of artistic movements that came into existence, flourished, and faded out during this timeframe.

The impressionistic characteristics of one work, La Guardiana di Tacchini (1890-1895) by Federico Zandomeneghi, are striking. A Venetian artist, Zandomeneghi lived in Florence for five years, where he took up “en plein air” painting alongside his contemporaries. The impressionist style, usually reserved for bodies of water, flowers, ballerinas, or fancy Parisian parks, was utilized to depict a young farm girl sitting on a chair outside, keeping an eye on her turkeys. The girl’s face is cast with an orange tinge as she sits there listlessly, head bowed, disregarding the turkey that seems to be begging for her attention at her feet. The potent red and green hues jump from the frame, evoking the languor and listlessness of mid-afternoon heat. The viewer can almost hear the cicadas.

One would expect that placing this work near the fresco-like flatness of Ritratto della Cognata (Portrait of my Sister-in-Law, 1865) by Giovanni Fattori would seem jarring, but the two complement each other quite nicely. This second painting stars an austere-looking woman, dressed in black, her fingers laced and eyes staring directly ahead. She leans forward in her chair as if deep in thought, infusing Fattori’s piece with a tangible sense of tension not present in Zandomeneghi’s.

Pairings like this are possible because, though the 40 exhibits on display vary greatly, their shared theme of womanhood creates a single, unified ensemble. In this vein, the exhibition catalogue organizes the works based on the characteristics of each female subject, rather than artistic style. The “cultivated” women are reading or studying, while the “mysterious” face away from their viewers. The category of “pensive” women is fairly self-explanatory, and the “indecipherables” are those with facial expressions that resist interpretation. Fattori’s painting is part of this last group, as the catalogue explains that the subject’s laced fingers could be either a casual gesture or a sign of rigidity.

According to the curator, Giuliano Matteucci, the show seeks an authentic representation of womanhood, in contrast to the diminished characterizations circulated by modern media. The collection does not portray the “specific femininity” of women like Coco Chanel, figures widely accepted as female icons. It is instead ordinary women from all walks of life that are on display here: Matteucci calls them “anti-divas,” a term typically attributed to female celebrities whose fame does not depend upon the approval of the masses. With the show, Matteucci intends to raise the question for society at large regarding which type of women should society be look to for inspiration.

Matteucci founded the Centro Matteucci per l’Arte Moderna, a modern art museum , a modern art museum located on via Gabriele D’Annunzio 28, as a space for the celebration of 19th and 20th art. It has since become a culturally and socially important institution, something one might not expect to find in a town most celebrated for its beaches and the Tuscan carnival. The current exhibition is open every evening from 5:30 – 10 pm, in the mornings on Saturday and Sunday from 10 am – 1 pm and 5:30 – 10 pm including the Ferragosto holiday on August 15, and closed on Mondays.

Tickets are €8 each, and more information is available on their website. (emma hempstead)