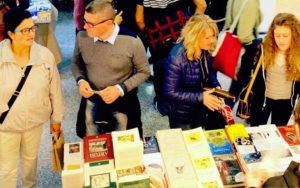 Nov. 11-13 at Palazzo dei Congressi, Pisa. Open daily 10 am to 8 pm.   Admission € 5 on Saturday and Sunday, free on Friday. Free entrance for 18 and under in addition to the disabled. Reduced admission for holders of Trenitalia tickets.

After the Internet festival in October, Pisa is back as a protagonist on the cultural scene in Italy with the Pisa Book Festival, a fair that promotes independent publishing houses with 160 stands from all over Italy and with more than 200 events. Ireland will be the guest of honor.

The city on the Arno river never stops to fascinate intellectuals and people who are interested in its everlasting charm of art and beauty. Percy Shelley wrote: “Our roots were never struck so deeply as at Pisa.” He considered it the perfect place to settle and base the Pisan Circle, a group of British expatriates that counted among its members the same Shelley, his wife Mary, George Byron, Thomas Medwin, Leigh Hunt and Edward Trelawny.

After Turin’s Salone del Libro (now co-partnered with Milan) and Più Libri Più Liberi in Rome, the Pisa Book Festival, now in its 14th edition, is the third most important national book fair, It brings together editors, publishers, authors, journalists, translators and readers who will discuss literary production in Italy and the rest of the world during seminars, meetings and presentations in both Italian and English. Among the Italian publishing houses that will present their new releases this year are Clichy, Minimum Fax, Nottetempo, Sellerio and Fazi.

As in the preceding editions, the festival attracts some of the most popular and appreciated writers in Italy, such as Sergio Staino, illustrator and director of Italian journal L’Unità, who wrote his autobiography “Io sono Bobo” (I am Bobo) along with La Repubblica journalists Laura Montanari and Fabio Galati (Saturday, Nov. 12, 6 pm, Sala Fermi).

The concept of mercy will be in the forefront during the presentation of “The Lady of Sing Sing” by the Florentine writer and anthropological filmmaker Idanna Pucci. The book previously published as “The Trials of Maria Barbella” explores the story of the first woman sentenced to the electric chair. Festival director Lucia Della Porta will lead the discussion.

Della Porta will also introduce the American writer and producer Terence Ward. A cross-cultural consultant for 25 years on the Middle East, he wrote “The Guardian of Mercy: How an Extraordinary Painting by Caravaggio Changed an Ordinary Life Today.” The book features parallel stories on Caravaggio and the current 21st century Neapolitan custodian of the painter’s important work The Seven Acts of Mercy (Friday, Nov. 11, 6 pm, Sala Fermi).

Nature will be the common ground for the presentation of “La via del Sole” (The Way of Sun) by Mario Corona, writer, sculptor and mountain climber, and of “Raccontare il mare” (Talking about the sea) by Bjorn Larsson, the Swedish writer and sailing enthusiast, always on Saturday.

The charm of the Emerald Isle, with its green countryside that inspired the logo of this edition, will animate the opening speech by Catherine Dunne, the Irish best selling author of “The Years that Followed” (Friday, Nov. 11, 11 am, Sala Pacinotti).

The young writer Caitriona Lally will talk about “Eggshells,” a fantasy novel that made her famous in the UK. Eimear McBride will present “A Girl is a Half-Formed Thing” a novel that received the Bailey Women’s Prize for Fiction and the Kerry Group Irish Novel of the Year Award. During the seminar “The Languages of the Night” author Barry McCrea will discuss the modernism of Joyce, Proust and Pasolini (all three events will be held on Friday, Nov. 11, from 3 – 5 pm, Sala Pacinotti).

The Irish novelist and economic satirist Julian Gough will arrive from Berlin to present his humorous book “Jude in Ireland” with Joseph Farrell and Luca Murphy (Saturday, Nov. 12, 3 pm, Sala Fermi). On Sunday there will be a conversation about Irish crime writing with Cormac Millar, author of “An Irish Solution” and “The Grounds,” and Conor Fitzgerald, father of the series featuring Commissario Alec Blume, an American living in Rome.

Among the lectures and discussions about James Joyce in homage to his final and most experimental work “Finnegans Wake,” Enrico Terrinoni will address the topic of translation with Fabio Pedone (Friday, Nov. 11, 6 pm, Sala Pacinotti).

For the fifth year running the daily newspaper La Repubblica is media partner of the Pisa Book Festival. Journalists Laura Montanari, Fabio Galati and Gianluca Monastra, will moderate meetings and conversations at the Repubblica Caffè. This edition will host the presentation of Catherine Dunne’s new novel “All That I’ve Loved,” not yet published in Italy (Sunday, Nov. 13, 12 noon), and Giordano Meacci’s “Il cinghiale che uccise Liberty Valance” (The Boar that killed Liberty Valance), finalist for the prestigious Strega Prize (Friday, Nov. 11, 3 pm).

Francesco Niccolini, the playwright who wrote “Il filo dell’acqua” will discuss theatrical prose (Friday, Nov. 11, 6 pm). The play, about the 1966 flood that devastated the historical center of Florence, had its grand debut on November 5 at the Teatro Verdi in Pisa and opened November 8 at Florence’s Teatro Puccini. Other highlights will be a conversation with Nadia Fusini, writer and Shakespeare expert, who wrote “Vivere nella tempesta” (Living in a Tempest) based on the Bard’s last play, and a meeting with Andrea Marcolongo about the enduring importance of ancient Greek.

An all-day English-Italian literary translation workshop will be held by Ilide Carmignani, who has been awarded with Mibact National Award for Translation in 2013, along with the publishers Stefano Friani, Roberto Keller and Maurizio Gatti on Friday, Nov. 11.

Tuscan writer Vanni Santoni will lead the “Scuola del libro” course on editing and narrative writing the November 12 and 13.

Attention will be drawn to the Eastern culture on the second floor of Palazzo dei Congressi where visitors will discover the secrets of the Chinese calligraphy.

Other workshops for kids will be held in the Junior Section of the Pisa Book Festival. There will be stands dedicated to some of the most popular independent publishers for kids, such as Lapis, Creativamente and Sinnos.

This year China is the protagonist of the annual art exhibition at Pisa’s Palazzo Blu. Opening November 10 (6 pm), “Racconti cinesi” (Chinese Stories) by Chen Jiang Hong will be on show through February 2017. The Paris-based painter, author and illustrator, recipient of multiple awards, revisits Chinese legends in children’s books. Published by Babalibri in Italy, signed copies will be available during the fair.

The complete program can be found at www.pisabookfestival.com. (celeste giampietro collins)