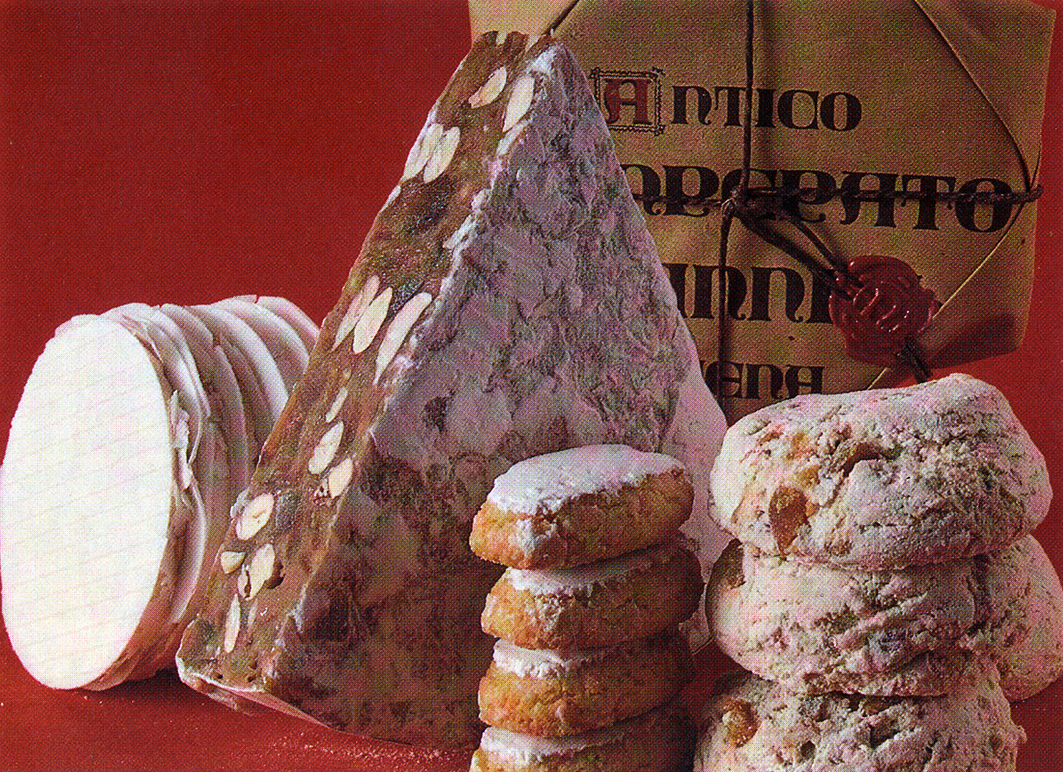 Shorter days and colder nights beckon the soul to take solace in simple pleasures: warm socks, country walks and, perhaps, indulgence in special foods.  In Tuscany it is toward Siena that one must find the most delicious of winter sweets, including the well-known panforte and its lesser-known, older cousin panpepato.

Panpepato, or panforte nero, was the original Christmastime fruitcake of the area.  If it can be said that certain foods are more than the sum of their ingredients, surely it is so for this aromatic and dense cake.  Almonds, hazelnuts, honey, candied fruit and spices (nutmeg, pepper, cinnamon and cloves) blend together to create a dessert that is truly memorable.

Panpepato was first produced in the Middle Ages by nuns who made use of the early fall almond harvest and of spices newly available from the port of Venice.  It was only Roman Catholic church pharmacists who dispensed the spices and who sold the finished products to the public.  Only later did the specialized job of pasticciere (confectioner/baker) emerge.

Panpepato relinquished its place to panforte in the late 1800s when in celebration of a visit to Siena by Queen Margherita of Savoy, a milder recipe was developed.  The rich nuts, honey and dried fruit from the older recipe were not abandoned but the stronger spices were in deference to modern taste and a quicker turn-around time for consumption.  Indeed, it is now panforte which claims more popular appeal, though in Siena older generations still prefer panforte nero.  Modern producers of both cakes closely guard the secret combination of spices.

Among the famous pasticciere names in Siena is Nannini, a family long respected for the high quality and wide variety of desserts.  The establishment gears up for its most intense production towards the end of the year, when more employees are generally hired to meet the heightened demand that begins on November 2 (the Italian feast of Ognissanti) and ends after Christmas on January 6 (Epiphany).

White confectioner’s sugar footsteps lead from the building’s foyer to the work room, which, despite the passing of more than seven centuries, retains something of what the original process might have been.  The ingredients are blended in huge pots, and men stir the mixture with enormous wooden spoons until it becomes a dough.  A machine processes the dough by cutting it into the approximate size.  Employees mold the cut dough into balls and press each one into its round form.  The cakes are baked slowly at low temperature, and then set on racks to cool before being hand-wrapped.

While the most famous of Siena’s desserts, panforte is certainly not the only sweet to be found on the holiday tables in Tuscany.  There are delicious ricciarelli cookies made of almond paste and egg white, dusted with powdered sugar, of Arab origin, and the more rustic cavallucci (both pictured) hard, spicy cookies with nuts and dried fruit.  In addition, there is copata, Siena’s version of of Italy’s widely enjoyed torrone (almond nougat).  The recipe for copata calls for the nougat to be flattened  so that the almonds are ground much finer, thus releasing a particularly almond-y flavor to this soft torrone.  Enjoy!