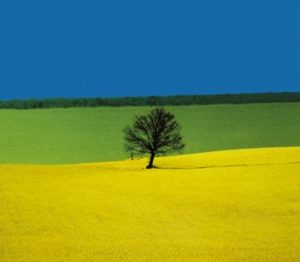 It is more astounding to see what a truly great photographer can do with the click of the camera than what a fine painter can do with brushes paint and canvas and much more time, especially in the area of the geometric abstract style. This is evident in the fine art photography of Franco Fontana, currently on display in San Gimignano.

Surprisingly, in the quiet end of town within a yet more medieval atmosphere than the touristy Porta San Giorgio side where one usually enters, is one of the great museums of contemporary art in Italy; the Raffaele De Grada Gallery, which is currently hosting Fontana’s work through January 6 (open daily 11 am – 5:30 pm, closed Christmas. New Year Day hours are12:30 – 5:30 pm).

Franco Fontana, from Modena, joined an amateur photo club in his late twenties, in 1958, and immediately found success: he was able to exhibit his work in Modena and Turin within the next few years and had his first one-man show. The San Gimignano retrospective comprising 130 images is arranged by theme. Some of these early works are present, already showing his personal style of strong contrasts in color, then an innovation, in the world of black and white art photography, “Urbano” (1960), “Emilia” (1961) and the magnificent “Riccione” (1968) reveal by their titles that many are shots of landscape, but nature seen as abstract composition with bands or stripes, usually horizontal, of contrasting colors, often spectacularly surprising. There is an urban abstraction also from this period;” Chiasso, 1960″ that would be a masterpiece of abstract painting, barely recognizable as a small urban passageway.

Some human figures appear finally in section ‘American Lights,’ which portrays only figures engrossed in themselves, uncannily lonely and isolated, reminiscent of Hopper paintings. Only human shadows enliven more cityscapes from his later work. Even his more recent nudes in the “Swimming Pool” section are more about the abstract symmetrical shapes of the human body quite sensual but without any emotional content or humanity.

Fontana finally decided to make photography his profession in 1976, the date of his surprisingly simple but atmospheric “Comacchio”. Continuing with enormous success ever since, also commercially, over the years until now. At the Gallery Opening, with a vivid personality called by his colleagues  “undisciplined” it was interesting to see how this convivial character has managed to make such pure forms from reality. (susan arcamone)