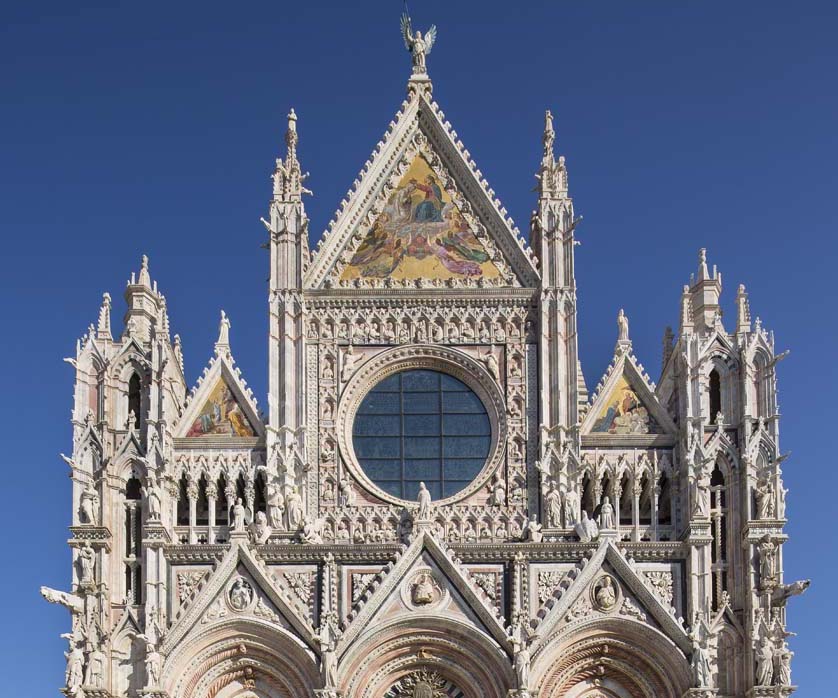 The magnificent facade of the Siena Cathedral

Chiaroscuro—light and darkness—that essential component of Italian art, is especially visible in Siena at present thanks to the fact that the city’s luminous art treasures can still be visited free of charge in the Cathedral (Duomo) and at the nearby Museo dell’Opera museum until July 31.  A recent addition of an attraction to see in Siena is the recently-inaugurated exhibition in Santa Maria della Scala, dedicated to masterworks from the 19th and 20th centuries and entitled “The Dream of Lady Florence Philips: The Collection of the Johannesburg Art Gallery,” accessible at a modest admission price of €5. August 1, the start of Italy’s premier vacation month, will mark the grand reopening of the Piccolomini Library, Facciatone, Crypt and Baptistery with normal entrance fees and hours, which will also be true of the Cathedral and Museo dell’Opera.

As Italy continues to advance towards reaching a new normal post-pandemic, the flip side of the situation is evident in Siena, a Tuscan city whose economy has been hit particularly hard after the cancellation of Piazza del Campo’s iconic Palio horse races and the lack of American tourists. Despite this, visitors from Italy and the European Union alike can be seen walking its medieval streets.

‘THE DREAM OF LADY FLORENCE PHILIPS’

As the curator pointed out during the press preview, the show provides a tour of comparatively recent art history starting with the Romantic, Pre-Raphaelite, Realism, Impressionist and Post-Impressionist (including Pointillism) movements and proceeding to modern styles of Cubism and Pop Art.

A TOUR OF SIENA

The radiantly white Siena Cathedral, mainly Gothic, is directly across from Santa Maria della Scala. Built in 1196, the architectural masterpiece is known by its astonishing marble facade and stained glass window designed by Duccio di Buoninsegna that depicts the Last Supper. Upon entering, in the darkness of the chiaroscuro, visitors will see a black and white interior illuminated by sculptures from the Medieval and Renaissance time periods created by the most talented artists.  In particular, there is the impressive pulpit designed by Pisano and completed in 1268. The cupola’s supportive pillars continue the notable black and white design to break from tradition with its hexagonal form. There are high-relief carvings that portray scenes from the Lives of Christ, which were restored in the summer of 2018. Exiting the Cathedral, walk along the Piazza Jacopo della Quercia and admire the Duomo, as well as a breathtaking view of the surrounding city and countryside.

Find time to see the works contained in the Museo dell’Opera, one of the oldest museums in Italy. Here the guest will find a collection of marble carved by Nicola Pisano and Jacopo della Quercia among other artists, as well as wooden sculptures, paintings, altarpieces, and manuscripts.  It is, however, the Maestà or Madonna in Majesty, by Duccio di Buoninsegna, that is the artist’s, the museum’s and the city’s, greatest masterpiece. In 1308 Duccio was awarded the commission to create a huge, double-sided altarpiece for the Cathedral. In 1311 when the work was finally finished, it was carried in a triumphal parade from Duccio’s workshop through the streets. The massive altarpiece was escorted by Sienese city officials, clergy and townspeople, who carried candles and torches. With all the church bells of the city ringing in celebration, the grand procession, which included musicians playing trumpets and other instruments, moved slowly to the church.

Of the panels, the central one is the most impressive, with its tapestry of Saints and Prophets set against an intricately incised gold background. The central figure of Mary dominates the scene, seated regally on her elegant marble throne holding Baby Jesus on her lap, who looks straight out at the viewer. The inscription at the base of the throne reads “Holy Mother of God, bestow peace on Siena and salvation on Duccio who painted you.” The divine atmosphere the painting creates is designed to give shelter to the soul. The warm colors, the domination of gold and the masterful play of positions, eyes, and gestures are all part of what make this work so outstanding.

Starting August 1, visitors can take the spiral staircases at the base of the Cathedral all the way to the “Doorway to the Sky” (La Porta del Cielo) where they may experience panoramic views inside and outside of the church as if they were engaged in a dream. Make sure to take in the grandeur of the marble floor (pavimento) of the Cathedral, which contains artwork chiseled into the pavement using a mosaic inlay technique. In addition to Pisano’s masterpieces, guests can also tour the Piccolomini Library which consists of beautiful rich frescos by Renaissance Umbrian painter Bernardino di Betto known (Pinturicchio) depicting the biography of Pius II in 10 episodes.  For reservations to visit sites in Siena, check the Opera Duomo Siena website for prices, then call +39 0577 286300 or email opasiena@operalaboratori.com.  (elizabeth berry/additional reporting by graham hacia)