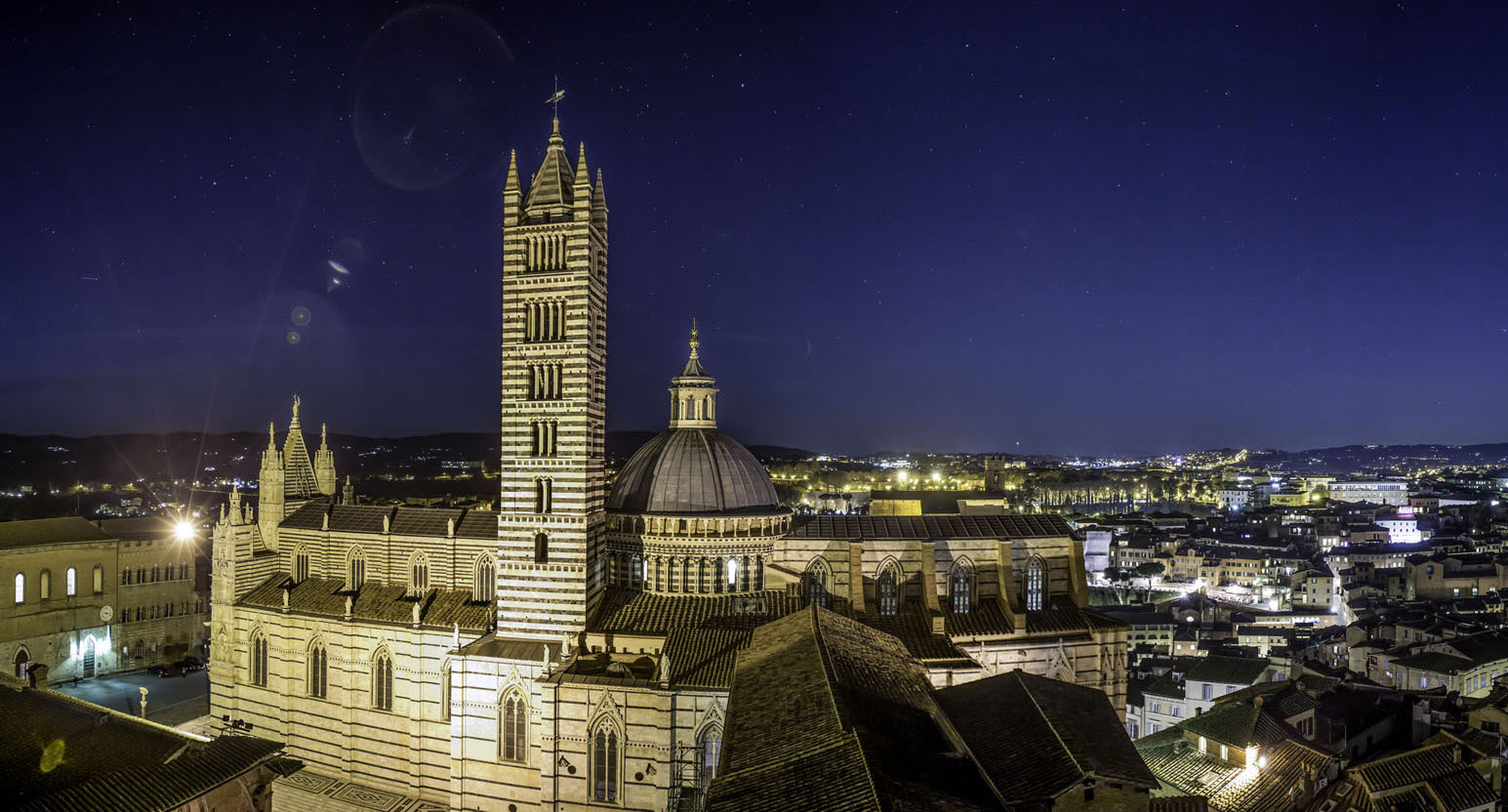 Siena, with its historic center declared a UNESCO World Heritage Site, offers a unique opportunity for visitors to enter the heart of its picturesque neighborhood contrade thanks to a special free initiative: “Author Walks.”  The series began in January and will continue during the months of March and April with five dates.  Residents and tourists can learn more about the unique characteristics of the Siena contrade thanks to the tours, which are conducted through the streets and alleys of the city.  Participants in the Author Walks” can retrace the history of 17 different neighborhoods, one at a time, by visiting museums, churches and palaces accompanied by a guide.

Visitors from around the world come to Siena in July and August to witness the Palio, a horse race with jockeys riding bareback representing the contrade or districts of the city competing for the year’s Palio or banner.  The zones, originally formed during the Middle Ages, were organized to supply troops to military mercenaries hired to defend Siena from its arch enemy: the city state of Florence.  In modern times the districts have become localized areas of patriotism. Like small republics within the city, each has their own administration and elected council. Important events such as marriages, funerals and festivals are celebrated within each tight-knit community.  The neighborhood loyalties are so strong that most Sienese are baptized twice, once in church and once again in their district fountain.

Each of the 17 wards, named after a symbol of nature or animal, possesses a museum, a church commemorating its patron saint, a fountain and its stable for the Palio horses.

This walk exploring the neighborhood of the Civetta, or Owl, begins in Piazza Tolomei and the palace of the same name, long the home of the powerful Guelph family of merchants and bankers.  It continues to the church of San Cristoforo, an imposing Romanesque edifice where the Council of the Sienese Republic convened beginning in the 12th century.

Next is the street named after Cecco Angiolieri, the blasphemous and ribald poet who lived on the street in the 13th century.  Angiolieri, a contemporary and friend of Dante, the son of the Pope’s banker, was famous for his caustic wit.

Into the heart of the district one finds the Castellare degli Ugurgieri, a fortified complex built in the 13th century.  The Castellare, which still contains remains of the medieval towers, now houses the Museum Civetta with ‘Secret Rooms’ down to 15 meters (nearly 50 ft.) below street level.

This district, named after the unicorn, historically put its faith in the mythological animal as a good luck token and panacea for all ailments.  The walk begins in the Via di Pantaneto with the Logge del Papa (Lodges of the Pope), built by Pope Pius II as a gift to his family. Next the group will visit the 18th century Baroque church of San Giorgio.  An ancient bell tower remains which was erected after the Battle of Montaperti in 1260 to commemorate the Sienese victory over their longtime enemies, the Florentines.

San Giovannino della Staffa, the district’s oratory, was built on the ruins of a temple dedicated to the Roman god Jupiter.  Just outside the church one finds a fountain that provided water to the Sienese population since Etruscan times. A city without a river, ancient city planners built a vast system of underground tunnels called bottini to distribute water through the city.

The noble district of the Nicchio (Seashell) lies in the Pispini district of the city.  Pispini, or waterspouts, come from the generous Fountain of Santa Chiara which supplied water to the neighborhood.  The walk begins at the grand gate of San Viene where, according to tradition, the remains of St. Ansana, martyred at the Battle of Montaperti, were returned to mourning citizens.  Next the group will view the fort built to strengthen the city in the 16th century and moves on to the Renaissance church of Santo Spirito, containing frescoes commemorating St. James’ defeat of the Moors in Spain.  Guests can see the symbol of the district, a large stucco seashell, on the façade of the oratory dedicated to St. Gaetano. Just behind the church the group will visit the local museum.

Adjacent to the oft-photographed Piazza del Campo, the Contrada of the Tower encompasses Siena’s Jewish quarter and synagogue.  Its symbol of an elephant with a tower on its back, said to commemorate Hannibal introducing the pachyderm to Italy by crossing the Alps, can be seen throughout the area.  The route follows Via Salicotto to the oratory church of San Giacomo housing a series of frescoes depicting the Four Evangelists as well as the virtues of hope, faith and charity.  Visitors will tour the Museum of the Tower to view an Etruscan tomb from the 2nd century BC, the remains of a 13th century wall and a water cistern from Roman times.

This zone, the Noble District of the Eagle, set in the center of the city contains the Duomo, or cathedral, with its striking green and white marble façade.  Tour participants will want to look at the extraordinary inlaid marble mosaic floor, although only a part of it is on display.  The neighborhood’s bright yellow flag proudly displays an imperial double headed eagle, although the Eagle has the dubious distinction of winning the fewest Palios, thereby nicknamed the Nonna (Grandmother).  The walk includes the museum housed in the Oratory of Tredicini.  Inside visitors can view the oldest surviving Palio banner from 1719.

The series takes a break during the summer months and resumes in October. The Author Walks are free of charge, with a maximum number of 80 participants.  For info and reservations (which are required), call 0577 391787 or send an email to redazione@toscanalibri.it. Audio devices to follow the visits provided by FOLLOW ME are available for participants (at a cost of € 1 and subject to availability).  (rita kungel)