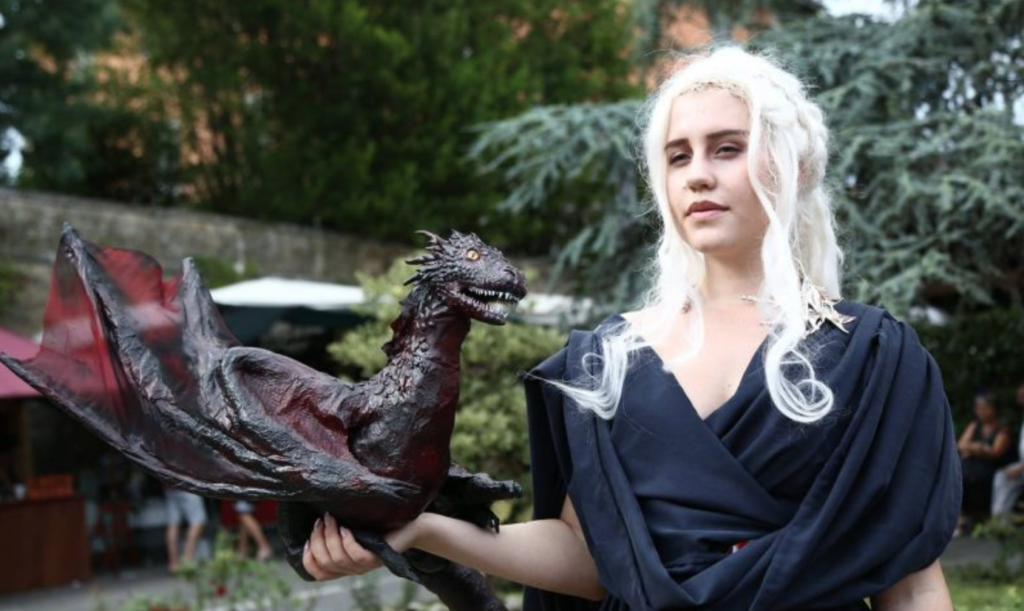 Cosplay and concerts, pirates and play-acting, sword fighting and lightsaber duels. It’s very easy for fantasy fans to get lost in their own worlds at ‘Festa dell’Unicorno,’ the Festival of the Unicorn.

One of Italy’s biggest sci-fi and fantasy conventions is back with a bang for its 15th anniversary. Attendees can converse in the Star Trek language Klingon as they wander through masses of people in costume, dressed as elves, orcs, or even anime characters. Circus and puppet shows take place in the same areas as medieval reenactments. Visitors can take animation classes just feet away from haunted houses.

Special guests this year include the Phelps twins (Fred and George Weasley of Harry Potter fame), guests of the Harry Potter convention which takes place during the festival. Also invited is Sean Astin, best known for his roles as Samwise Gamgee in Lord of the Rings and Bob Newby in Stranger Things. Francesco Pannofino, famous for his Italian dubbing of the voices of Denzel Washington, George Clooney, and the character Rubeus Hagrid, and Daniel Portman, who played Podrick Payne in Game of Thrones, will also make appearances. Italian dub-singer Cristina d’Avena will perform some of her top songs, such as the Italian themes of Pokemon, One Piece, and Hamtaro.

The fair is usually divided into eight sections: Comics and Craziness; Gnome Village; Enchanted Fortress; Knight’s Citadel; Court of Dreams; Pirate’s Cove; Steel Abyss; and the City of Nightmares. For the event’s 15th anniversary, the festival has opened a new area: Steampunk Valley, based on the popular subgenre, which will also host the stage for musical events.

Each zone hosts events organized around its theme. Comics and Craziness houses various cosplay activities and special guest speakers, while The Village of Gnomes is the home of the Lego play-zone and other activities for the hobbit-sized little ones. Enchanted Fortress, Knight’s Citadel, and the Court of Dreams all host medieval shows and activities, though the latter also has games based on Lord of the Rings. Pirate’s Bay is, unsurprisingly, pirate-themed, with room for treacherous sirens and other fantasy sea-creatures as well. The Steel Abyss leans heavily into sci-fi, focusing on shows such as Doctor Who and Star Wars, and The City of Nightmares has various horror-themed escape rooms.

Another new area to the festival is Unicorns & Dice, a zone set up specifically for on-site roleplay games like Dungeons & Dragons, with games tailored to all types of guests. On the occasion of da Vinci’s 500th anniversary, there will even be a specially designed Leonardo da Vinci tabletop game.

One-day tickets to the event cost 12€ per day, while reduced tickets are 8€, though children under 10 enter for free. Two-day tickets cost 23€, and tickets for all three days cost 28€. (katy rose sparks)