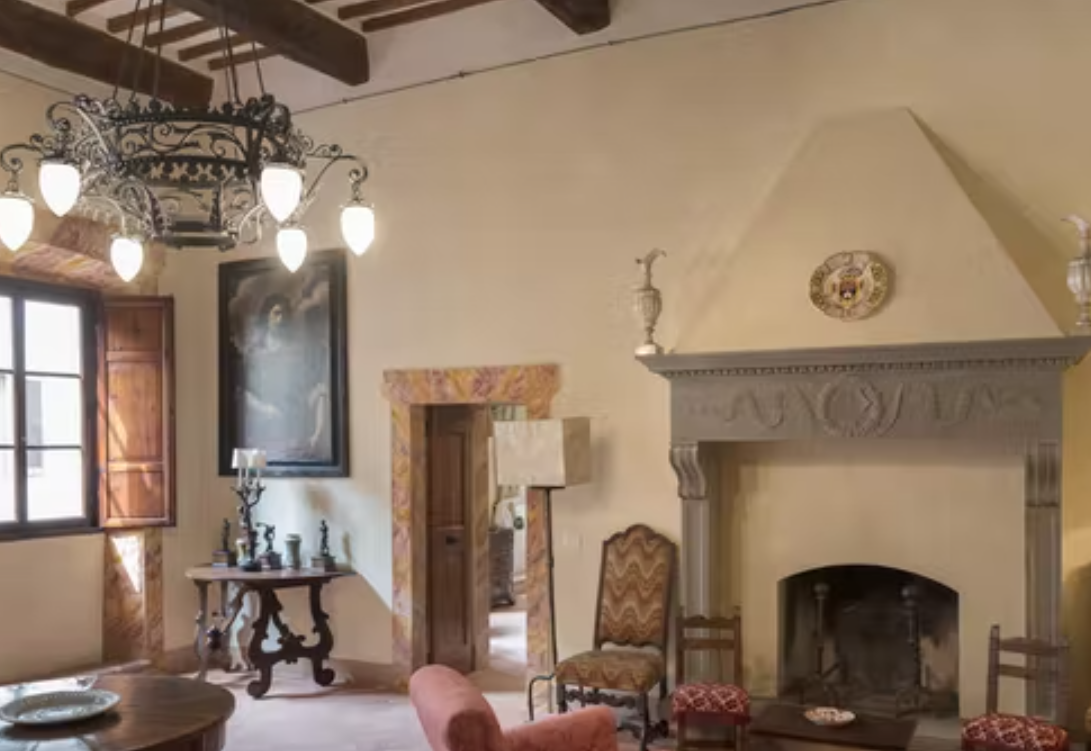 The interior of the Campatelli Historic Home in San Gimignano

FAI offers Italians and guests to visit many historical sites and cultural locations, along with special entrances to normally closed or inaccessible sites and buildings. The openings are sponsored by Fondo Ambiente Italiano (the Italian equivalent of the National Trust) – an organization that safeguards and promotes Italy’s historic patrimony, even encompassing small Tuscan hilltop towns.

The FAI ‘Spring’ Days celebrates its 30th anniversary, with an opportunity to support the values of cultural heritage. With 700 venues open to the public through Italy, the FAI offers a unique experience for Italians and visitors. All venues offer private tours, which are given by students who aspire to be specialized tour guides. Admission is free, but a minimum €3 donation per site is suggested. All donations received will be used for the restoration and maintenance of the landmarks. FAI maintains historical buildings, churches, archaeological sites, libraries, museums, hilltop towns, parks/gardens and manufacturing venues, as well nature and science/industrial technology focused locations.

The tower and the house are located in the historical city center of San Gimignano. The tower is one of 14 towers originally built in the 12th century in town. The palazzo around the tower was constructed—and added on to—during multiple centuries. Before entering the tower, guests pay a visit to the home perfectly preserved to admire its late 18th-century furnishings.

This was the first museum in Italy dedicated solely to jewellery, established in 1998. The company, “Unoaerre,” was established in 1926 during the Fascist era. “Unoaerre” was the main supplier for iron and iron/nickel alloy wedding bands, as many Italian couples donated their gold ones to the Italian government before and after during the Second World War. During a later period, “Unoaerre” started to work in gold.

In the museum, visitors follow the museum itinerary with sections that range from industrial archaeology to goldsmith art that spans over 75 years of production. Among the many curiosities are a bracelet and necklace in white gold and diamonds designed by Jerry Lewis and a 1986 prototype of a sword commissioned by Iraqi dictator Saddam Hussein.  Along the itinerary, visitors see production machines and over 500 pieces of jewelery.

Normally, the church is closed and no services are conducted, so this is a unique opportunity. The most ancient parts of the Sant’Alessandro are from the 9th century, and was expanded in the second half of the 11th century. In the crypt are relics of its namesake. The church is a prime example of Romanesque architecture in Lucca. The simple façade includes Roman capitals. The adjacent garden—which in the past supplied vegetables and fruit for the local monks—is open to visitors as well.

Overlooking the Piazza dei Servi in Pistoia, the church of Ss. Annunziata was built in the 13th century in an initially Romanesque style. Multiple additions to the church were made during the 1700s and 1800s. The original structure of the church is still present, but later additions show the evolution of architecture and art over the course of 600 years.

The ancient farmhouse, now a working estate, has its focus on organic farming. Surrounded by olive trees, Podere Lovolio produces its own olive oil. It is an oasis of nature, where visitors can experience the rich history, tradition and culture of the Tuxcan countryside. The estate is home to many animals such as goats and donkeys to hens, rabbits, peacocks and alpacas. Visitors can also view art installations.

Jewish residents settled in Pisa centuries ago. The synagogue, located in the historic district of San Francesco, north of the Arno, was built at the end of the 16th century and modified during the 19th century. Renovation was supervised by the architect (Marco Treves) who build the Florentine synagogues. The Jewish cemetery is also visible from above for those who walk on the city walls. The tombstones in the cemetery have inscriptions in Hebrew, Italian, Spanish and Portuguese, showing Pisa to be a crossroads for travelers. Visitors will hear about famous people buried at the cemetery, in addition to local Jewish traditions and cuisine. The persecution and deportation of the Jews of Pisa during 1943 and 1944 will also remembered.

Scansano is a small village located on a ridge between the Ombrone and Albegna rivers. The area has been inhabited since prehistoric times and the start of Etruscan civilization. Visitors can see the layers of history through the local architecture. The village is surrounded by vineyards and olive trees, as early as the 7th century before Christ, wine and olive oil were produced here.. From the ridge, visitors can see Mediterranean islands such as Elba, Corsica and Montecristo. Scansano’s town hall, Palazzo Pretorio, was built in the 1400s and later became a courthouse; at present, it houses a museum with archaeological artifacts.

The itinerary winds through the village of Campiglia Marittima, starting at the Concordi Theater (Teatro dei Concordi)—built on the initiative of important local citizens and according to a project of engineer Francesco Fredi—was inaugurated in 1867. Visitors will follow an itinerary along to the Museum of Sacred Art, located several floors below the church of San Lorenzo. The museum is usually closed to the public and preserves liturgical furnishings of the Propositura di Campiglia Marittima; silverware, chalices, reliquaries, vestments, and many other special and ancient objects that date back from the 16th and 19th centuries. Guests end the visit in the political heart of the village: Palazzo Pretorio, the 13th century headquarters of the Captain of Justice, memorialized by the many coat of arms on the facade. Inside the palazzo are nature paintings by Carlo Guarnieri.