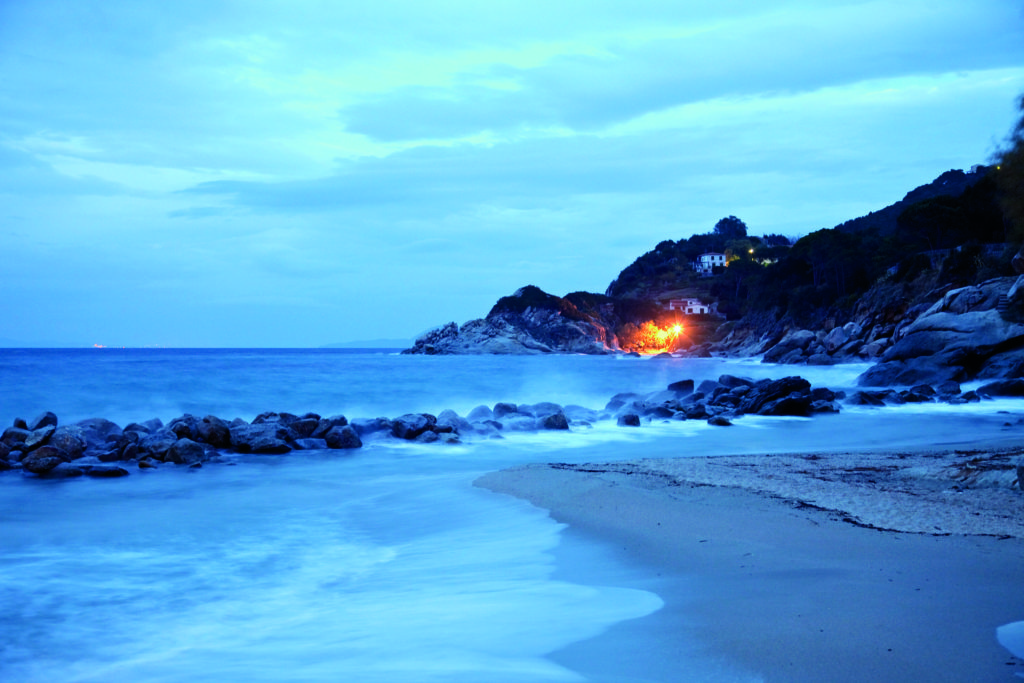 When people in Tuscany contemplate a beach vacation, the first word that often comes to mind is Elba. The largest island in the Tuscan Archipelago, which has more than 70 beaches of all shapes and sizes, becomes a tourist hotspot every summer, but it’d be a mistake to say that access to the Mediterranean is all it offers. Elba’s forested, mountainous inland matches the natural beauty of its coasts, and being inhabited since ancient times has left many historical sites worth exploring. The mild climate extends quality weather beyond July and August, and tourists looking to take an Elba vacation in September have many attractions to take into account.

The most obvious way to experience Elba is to frequent one of its beaches, and there are options that fit all manner of preferences. Young people frequently gravitate towards Cavoli, one of Elba’s most famous beaches that became known for its fine, white sand and warmer-than-usual water, making it ideal for those who want their beaches to be a happening social scene. Visitors hoping for a peaceful atmosphere should seek out places like Barabarca instead, as the sheltered cove is perfectly positioned for watching sunsets.

Lacona is considered great for children because of the way it gradually slopes into the water, and for people that prefer to bathe in the sun than the sea, beaches like Chiessi and Pomonte have large slabs of granite that practically beg to be laid on.  The spectacular rocky coast of Sant’Andrea is another popular spot.

There’s also an entire world hidden beneath the Mediterranean waves, and snorkeling can only get you so close — why not try scuba diving? Elba’s peak diving season runs all the way through early October, and the especially clear waters allow for great visibility and underwater photography. Work with one of the island’s six dive centers and take guided dives through a variety of sites, from coral reefs to shipwrecks, with master divers that know how to turn every nook and cranny into an exciting wildlife sighting. Also, given Elba’s long history as a trade port, it’s not uncommon to find ancient coins or pottery fragments while exploring the seafloor. Dive Center Blu is a specialty dive shop for seeing the underwater sights of Elba, with dive masters such as Andrea “Brighel” Daviddi acting as an expert guide. Located in Marina di Campo, a charming seaside town, the shop is at an ideal location for heading out to numerous diving spots.

The centerpiece of a dive at Triglia, was a beautiful underwater statue of the Madonna dating back to the 1500s, which was used to welcome boats back to Elba. At this location is a large underwater canyon, wide enough for divers to swim through easily, affording a view of  prickly scorpion fish blending into the coral, an octopus curled up in the underwater cliff side, and stunning jellyfish drifting with the light ocean current. Finishing off a successful trip with a delicious home cooked meal right on the boat and lounging in the sun on the bow, the trip was an amazing experience of sea wonders and friendships formed through diving.

A quick bus or car ride away from Marina di Campo, Seccheto, one of the smaller towns on the southern side of the island, is as charming as it is calming. Including an intimate beach area with adjoining a lovely bay, shops featuring local foods, and plenty of nature, it’s a beautiful area that evokes serenity in its visitors. For those how like to stay right on the water, there is no better place to find some peace and enjoy the sea views than La Stella. This lovely hotel has its own private beach and a garden for clientele to relax in the sun, as well as easy access to crystal waters. The venue is pet friendly, with dogs and cats welcomed with their owners, and offers a restaurant on a terrace with seafood specialities expertly prepared by an island chef.

When it comes to Elba’s interior, one of the best ways to explore is on foot, and the island offers a variety of hiking trails at varying difficulties. Many of these are organized around interesting religious and historical sites, including several marked by Napoleon Bonaparte’s time in exile there. For example, the 5.3-mile San Cerbone trail, considered of medium difficulty, leads through chestnut forests and past Napoleon’s spring to the Hermitage of San Cerbone. Those interested in upping the difficulty can extend their trip, continuing along from San Cerbone to climb Mount Capanne, Elba’s highest peak at 3,343 feet above sea level. Also, the climate makes biking a year-round activity, and as with the hiking trails, paths exist for bikers at all skill levels. City bikers can take easy, panoramic trips along the coastline, while mule tracks and inclines offer a challenge for even the biggest free-riding junkies.

Elba has no shortage of interesting history, and visiting multiple sites across the island can make that history tangible. Ruins document some of the island’s oldest inhabitants, including Le Mure, a Bronze age mountain fortress inhabited until Etruscan times, and Le Grotte, a Roman villa from the First Century BCE. There are also several important religious sites on the island. The aforementioned Hermitage of San Cerbone derives its name from the saint that supposedly took refuge there in the 6th century, and the nearby Sanctuary of Madonna del Monte dates back to the 12th century. The Hermitage of Santa Caterina, said to be the site where Saint Catherine appeared to a shepherd, is famous for the rare roses that grow in its botanical garden.

The Tuscan island is also notable for being Napoleon Bonaparte’s temporary place of exile, and multiple museums focus on his 10-month rule. The National Museum of Napoleonic Residences, comprised of both his city and coastal residences, open his lavish lifestyle to public view. Villa San Martino, effectively his beach house, has intricately dedicated rooms dedicated to Egypt and Napoleon’s second wife, Marie Louise of Austria. Villa dei Mulini, his home in Portoferraio, contains a library of books bearing his insignia and the original flag he presented to the people of Elba, who continue to use his design to this day. In honor of the 250th year since his birth, Villa dei Mulini is hosting a special exhibition of unique, 18th-century model soldiers, accompanied by historical documents, reliefs, and multimedia displays designed to evoke the Napoleonic era, until October 31.

Despite being separate from the rest of Tuscany, Elba is not immune from the region’s festival fever. From August 29 to September 9, the Musical Island of Europe Festival will transform Elba into a place of musical experimentation, as composers and orchestras are encouraged to create and learn tricky pieces. Performances are held in notable locations across the island, including the Le Grotte Roman villa and Portoferraio’s Teatro dei Vigilanti — founded by Napoleon in 1814 by converting a church built in the 1600s. The festival also awards the Elba Festival Prize to a young musician on the rise each year, with Greek violinist Jonian Ilias Kadesha slated to receive the honor in 2019. Information about tickets can be found by emailing the festival at info@elba-music.it.

Additionally, the Islands of Tuscany Walking Festival each spring and autumn encourages visitors to explore the many wonders of the Tuscan Archipelago National Park, of which Elba is only one part. Running from September 14 to November 3 this year, the Walking Festival organizes nature excursions around a wide variety of themes, ranging from health and spirituality to food and history. Something for everyone can be found in the daily events calendar, and reservations, required by 6 pm on the day preceding the event, can be made by emailing walking@parcoarcipelago.info.  (alex harrison, with reporting by cassandra yeam & nicole grant)