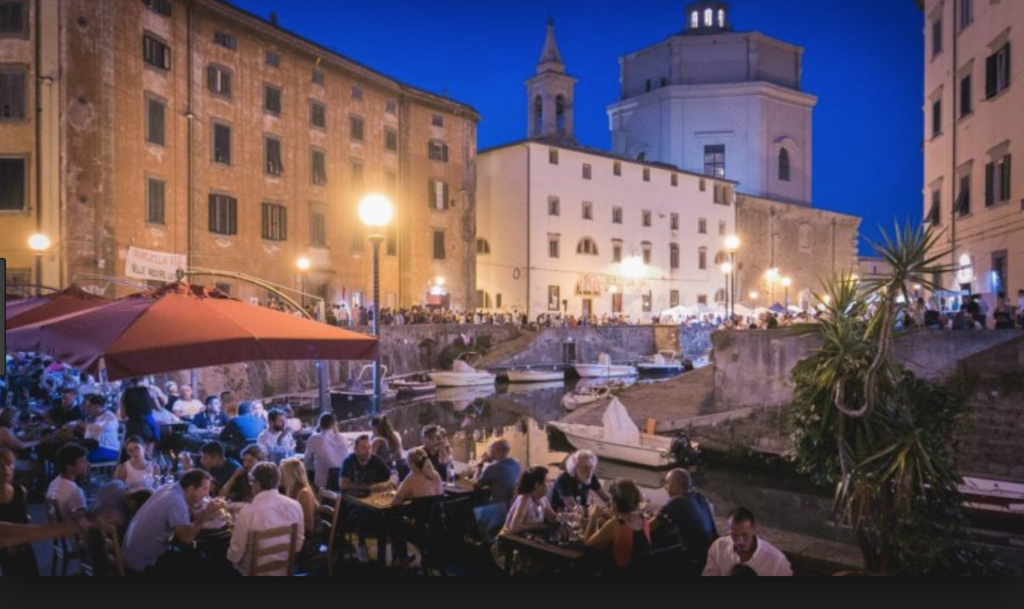 Tuscany has its very own Venice just outside the centre of the port town of Livorno, a hidden gem that comes to life every summer during the 5-day festival ‘Effetto Venezia.’ See here for the full programme of events.

Venezia Nuova, much like the real deal, is made up of a network of canals, bridges and grand palazzos on the water, all built by Venetian workers using exactly the same techniques as in Venice. Venezia Nuova miraculously came out of the Second World War almost entirely unscathed, preserving the architectural and historical treasures that make this neighbourhood so quaint, a window into Medicean Tuscany.

Livorno’s ‘Little Venice’ was built in the 17th century as a gateway to the city, one of the busiest ports in the Mediterranean at the time. The Medicis commissioned the building of canals to connect the aristocratic palazzos to warehouses and shipping routes, encouraging the trade boom and resulting influx of wealth that Livorno was enjoying.

While Venezia Nuova is architecturally speaking the spitting image of Venice, where the two differ significantly is that Livorno is not swarmed with 20 million tourists (and counting) every year. Its charm is not trampled by hordes of people, tourist traps or the environmental issues that threaten to sink Venice entirely as early as 2100. The neighbourhood of Livorno retains its authenticity, quiet and pleasant during the day, with the pace picking up in the evening as former storehouses turned bars and restaurants line the canals and street lights dance on the water.

For five evenings every summer, Venezia Nuova becomes all the more lively and atmospheric during the jam-packed programme of the ‘Effetto Venezia’ festival. ‘Effetto Venezia’ was first held in 1986 and has lit up the livornese summer every year since with music, theatre, dance, art, crafts, gastronomy, markets, fireworks and much more. The 34th edition of the festival will take over every nook and cranny of Venezia Nuova – squares, churches, courtyards, canals, fortresses – with the extravaganza of events.

The main stage will be set up in Piazza del Luogo Pio, upon which some of the biggest names in Italian music will dazzle crowds with free concerts, including pop band Major (July 31), Francesco Motta (August 1), Queen tribute band Killer Queen (August 2), Livorno’s own Enrico Nigiotti (August 3) and Morgan, Mauro Pagani and Bobo Rondelli in a tribute to Fabrizio De Andrè (August 4).

The serene 17th century courtyard of Palazzo Huighens will provide the setting for five classical music concerts, one on each night of the festival. A particularly exciting show will feature internationally famous livornese pianist Gabriele Baldocci. He will perform ‘Omaggio ai Queen’ (August 2), a series of instrumental versions of the rock songs that have been stuck in everyone’s head since the film ‘Bohemian Rhapsody’ came out last year, sparking a second wave of Queen fever.

An array of choirs and gospel ensembles including La Corale Mascagni, The Joyful Gospel Ensemble and the Corale Guido Monaco Etno-Jazz will sing at the Scali delle Barchette, the small harbour where the locals moor their boats.

In support of emerging livornese musicians, ‘Effetto Live’ returns to Falsabraga della Fortezza Nuova with 13 up-and-coming music groups that will take the stage with genres for all tastes, from rap to metal to classic rock.

A performance area on Largo Strozzi will celebrate all things blues, starting with Roberto Luti, one of the most expressive guitarists in the world, followed by Da Vinci Street, Frankie’s R’n’R Orchestra, Dinosauri del Blues and finally Steak Blue Band.

At the Fortezza Vecchia, Livorno’s castle, comic Stefano Santomauro and actress Alessia Cespuglio will conduct interviews and panels with the artists performing in the festival. ‘’Welcome on sofa’’ will take place every evening of ‘Effetto Venezia’ to give festival-goers an insight into the artists they have seen perform through a free flowing discussion of current events, culture and music.

In addition to the extensive musical line-up, ‘Effetto Venezia’ would of course not be complete without showcasing theatre as well. This year welcomes the show ‘Le stanze dei libri,’ directed by Emanuele Barresi, that will aptly be performed in the palazzo turned library Bottini dell’Olio each night of the festival. The play delves into Livorno’s important literary heritage; An old caretaker leads a group of livornese people inside a library, tells them how this building came to be, what it once was and what it represents today. He speaks to them of important Livornese authors Sabatino Lopez, Athos Setti, and Carlo Bini, whose names are dotted around the city on street signs, but it becomes apparent that the group is completely oblivious to them and their cultural significance. The caretaker begins reading some of these authors’ works to his onlookers and a few lines in, the characters from the books magically materialise before their eyes to enact the story.

As well as this thought-provoking theatrical experience, each night of the festival the Compagnia Vertigo Livorno will perform the comedy ‘Dove si mette la vecchia,’ directed by Marco Conte, at the Teatro ‘Enzina Conte.’ Set in 1970s Livorno, Gino Lena’s play still strikes a chord with the modern-day viewer with its humourous and timeless take on family dynamics.

‘Effetto Venezia’ even has something for sports fans — on August 2, the latest squad of A.S Livorno Calcio, Livorno’s football team that will play in the upcoming Serie B, will be presented on the main stage in Piazza del Luogo Pio.

Throughout the week, festival-goers can take boat tours on the network of canals to explore the Medicean city on water and, as every year, there will also be various walking tours, including a street art tour for those who wish to uncover a different side to the city. Market stalls and vendors will fill the streets as the cream of the crop of Livornese artisans sell their typical products. A dozen exhibitions — both open air and in a number of locations — will be part of the festival, including Livorno’s aquarium, tracing the history of Livorno in the Bottini dell’Olio, a miniature Livorno model in Bottega del Caffè and photography exhibition ‘I Believe’ in Fortezza Nuova, to name but a few.

Drawing the festival to a close with a bang, the much-loved firework display returns on August 4 at 12.30 am, set off from the Fortezza Nuova. The pyrotechnical show will be visible throughout the streets of Venezia Nuova, from the Scali del Teatro to Piazza della Repubblica.

Livornese locals and out-of-towners unite in a dynamic celebration of all aspects of Livorno’s cultural contributions, past, present and future, at ‘Effetto Venezia.’ Join the fun to discover the delights of Tuscany’s own Venice. (saskia brown)