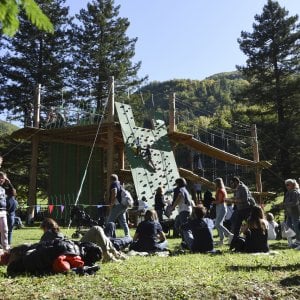 Dynamo Camp celebrated 10 years in helping adolescents ages 7-17 enjoy a break from their chronic illnesses in the mountains above Pistoia in Limestre, between San Marcello Pistoiese and Piteglio.

The founder of the nonprofit organization, Enzo Manes, explained the basis of what the first camp for recreational therapy in Italy stands on: generosity, commitment, responsibility, merit and respect.

Dynamo Camp is a branch of Paul Newman’s organization, SeriousFun Children’s Network. Founded in 1988, the initial non-profit organization intended to have branches worldwide in order to provide comfort and normalcy for children fighting debilitating sicknesses. Dynamo is one of 30 camps that are part of the global community dedicated to serving 6570 children since 2007.

Operational guide Serena Porcari described the camp as, “A vacation that is fun for children who have lost their childhood in hospitals.”

It’s a chance for children who live isolated lives to be with others who have grown up similarly to them. The list of activities available to them is endless including horseback riding, performing, dancing, painting and swimming.

The camp also recognizes that illnesses take a toll on the whole family and have invited campers’ siblings to participate as well.

The camp is run on fundraising. In 2016, they raised over 4.61 million. The staff includes about 800 volunteers from all over Italy. The key to both the camp’s success and the happiness of the campers is the support and generosity of others.