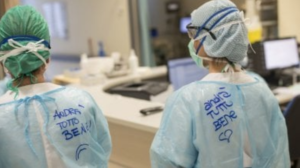 A Covid-19 vaccine will be tested on 550 disease-free volunteers in an English clinic at the end of April, the result of a joint collaboration between the researchers of Advent-Irbm in the Italian city of Pomezia (who had previously developed an effective vaccine for Ebola virus disease) and the Jenner Institute of Oxford University.  The hope is that it can be used — initially — to protect doctors, nurses and law enforcement personnel as early as September.

According to April 12-14 regional statistics, while the total number of patients is now at 7,527, the official count in Tuscany confirms that both the number of residents who have contacted Coronavirus — and the mortality rate — have declined steadily over the past three days.  There has been, however, 518 victims of the disease in the region from March 8 onwards out of a population of 3.7 million inhabitants.  It is to be noted that the average age of a Tuscan resident who died was 84.  The provinces and metropolitan areas with the highest number of cases are (in descending order):  Florence, Lucca and Massa Carrara.

Despite a large number of Chinese residents, Prato ranks last out of 10 provinces for Coronavirus infections and deaths.

Tuscany has a 7.1% Covid-19 mortality rate as compared to 18% in Lombardy, the hardest hit region in Italy, while the national average is 12.8%.

The Situation in Tuscany