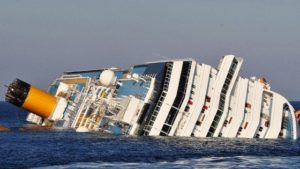 Italy’s High Court of Appeals confirmed the 16 year jail sentence of Francesco Schettino, captain of the Costa Concordia cruise liner, shipwrecked off the coast of Tuscany’s Giglio Island on January 13, 2013.

The ship — carrying 4,000 passengers — ran aground when it came too close to the coast to flash its light as a greeting to a retired sea captain, resulting in 32 casualties.  The youngest victim was five years old, and perished along with her father, when the Concordia leaned over thanks to water seeping into a huge gash. Schettino was criticized in a live transmission during the dramatic event because he left the ship and sought refuge on a nearby rock when there were still passengers abroad.

The District Attorney had asked for a stiffer sentence in the final appeal, which was rejected. Schettino has always said he ordered the helmsman, who was from Indonesia, to execute an emergency maneuver, who apparently did so too late. Experts have gone on record to state, given the speed the ship was going, the maneuver would not have avoided the collision.

In 2014, the Costa Concordia, which was lying on its side, was brought upright and refloated using the parbuckle salvage technique. The ship was then towed to Genoa and completely dismantled.