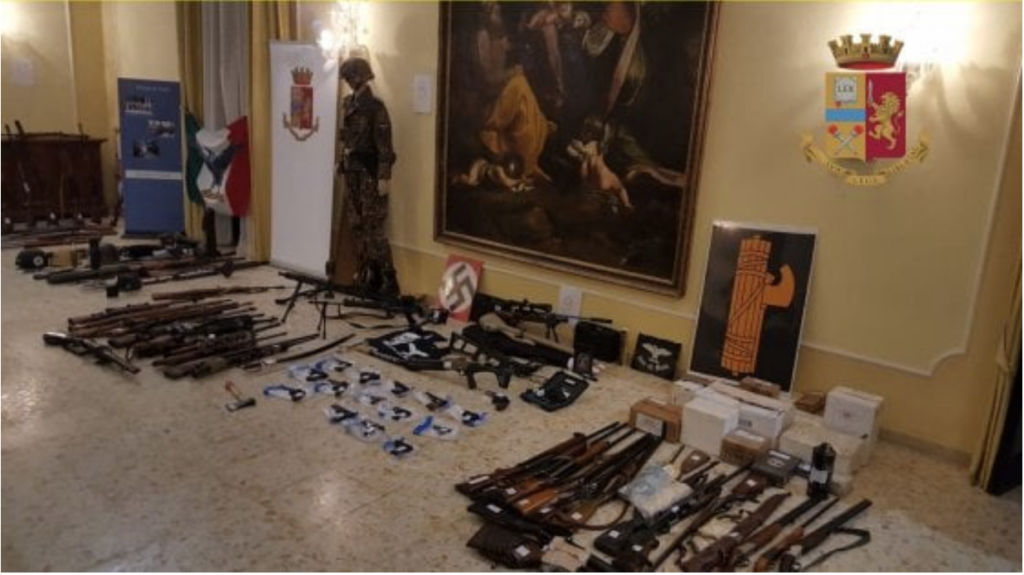 Confiscated material from the conspirators’ homes

A dozen right-wing extremists had planned to blow up the mosque of Colle Val d’Elsa but before carrying out the action were detained on the order of the District Attorney’s office in Florence.  They were intending to sabotage the venue’s gas pipes, deliberately causing a leak and a destructive explosion.

“When we move, we are not just watched but even more!” said one of the suspects.  The mosque in Colle Val d’Elsa was saved from sabotage because one of the two men arrested, a 60-year-old from Siena, was brought in by police, who had noticed him acting in a suspicious manner near the venue.

The group wanted to establish a “national republican guard” called to intervene “weapon in hand in the name of justice.” Members praised fascism and nazism in a personal chat and on social media. Investigations started from messaged intercepted by the Digos police unit of Florence and Siena on social networks, and continuing with assessments of other types as well. One of the hypotheses that emerged is that extremists had the idea of ​​constituting a “qualified assault structure ready for any eventuality,” say the investigators.

The group is also under investigation for illegal possession of firearms. According to the wiretapping, some of the suspects collected war material and unexploded ordnance using metal detectors in the Sienese and Florentine countryside. One of the extremists later said that he was capable for making silencers for his weapons.

The police of Florence and Siena carried out numerous searches in homes, offices, and warehouses in the province of Siena on Tuesday morning. The father and son who were arrested, Andrea and Yuri Chesi, 62 and 22, are accused of illegal possession of explosives and bomb parts.  (mary filatova)