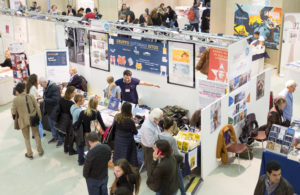 November 9 – 11: PISA BOOK FESTIVAL.  Palazzo dei Congressi, Pisa.  Open daily 10 am to 8 pm.  Admission € 6 on Saturday and Sunday, free on Friday.  Free entrance for those under 18 and the disabled; reduced admission for those travelers with a Trenitalia ticket to Pisa. Tickets can be purchased at door, or online.

Are we all characters in one of God’s dreams?  In the first chapters of the 1996 novel “Reality and Dreams” by iconic writer Muriel Spark, this unanswered question brings up a topic that is a constant in literature.  As everyone knows, nothing has more power than a book to transport readers to another place.  Or, to borrow a phrase from Rosa Montero, the award-winning novelist and journalist for El Pais, “novels are like dreams that you dream with your eyes open.”

There will be much to talk about at the upcoming Pisa Book Festival, whose motto for this 16th edition is “Chasing Dreams” (A caccia di sogni) and where the commitment is to bring visitors in a dimension where the real and the dreamlike crisscross.

The international festival that promotes independent publishing houses is a major cultural event for Pisa.  The city on the Arno that was the hometown of scientist Galileo and residence of the poets Percy Shelley and George Byron, as well as their expatriate friends of the Pisan Circle, becomes the gathering place every autumn for publishers, writers and readers.

During the weekend the festival, founded and directed by editor Lucia Della Porta, brings to the Palazzo dei Congressi 160 literary stands, and more than 200 events, including seminars, lectures, workshops and readings that give a complete picture of the publishing market and the contemporary cultural trends.

One event not to miss is “Muriel Spark 100” celebrating the centenary anniversary of the author’s birth.  The famous Scottish writer, poet and essayist, placed by The Times in its list of the Fifty Greatest British Writers, lived in Tuscan countryside for more than 30 years.  Best known for her witty plots and dark humor, masterfully expressed in “The Prime of Miss Jean Brody,” “The Girls of Slender Means” and “Memento Mori,” she will be the protagonist of a three-day event held in English by Professor Joseph Farrell.

Starting on Friday, November 9 (4 pm) in the Sala Pacinotti the life and work of Spark will be explored by James Campbell, Rosemary Goring, and actor Luca Murphy. On Saturday, November 10, the documentary “The Many Primes of Muriel Spark” and the presentation of the memoir “Appointment in Arezzo” by Alan Taylor will investigate the enigmatic persona of Dame Muriel (3 pm and 5 pm respectively). Sunday, November 11 at noon, Rosemary Goring, Alan Taylor and translator Livia Franchini will look at Muriel Spark’s place in the contemporary cultural scene for the grand finale.

Among the special events on poetry, on Saturday November 11, the words and music of Leonard Cohen will resonate at the Sala Fermi (6 pm). Silvia Albertazzi, author of the monograph “Leonard Cohen. Manuale per vivere nella sconfitta” (A Manual for Living with Defeat), and cover singer Dany Greggio will pay homage to the Canadian singer and songwriter who is commemorated in the Rock and Roll Hall of Fame and pursued a career as a poet and novelist before his first music album in 1967.

From Italy, some of the most acclaimed writers are expected, such as Massimo Polidoro, known for his studies on the paranormal, who will investigate the life and work of the famous illusionist Harry Houdini (Nov. 10, 6 pm, Sala Pacinotti) and Roberto Cotroneo, who will present his new novel “Niente di personale” (Nothing personal; Nov. 11, 5 pm, Sala Pacinotti). During his career, Cotroneo has reported on the culture as a journalist at the weekly magazine L’Espresso.

As in the previous years, the Italian daily La Repubblica is the media partner of the Pisa Book Festival.  During the festival meetings and conversations will be held by journalists Laura Montanari and Fabio Galati in a literary café.  Readers can meet, among the others, Pietro Grossi, the award-winning novelist and copywriter, finalist at the Independent Foreign Fiction Prize (Nov. 10, 6 pm), and Marco Malvaldi who will present his mystery novel “La misura dell’uomo” (The Measure of Man) with Leonardo da Vinci as an investigator at the court of the Duke of Milan (Nov. 11, 6 pm).

From Spain, guest country of honor this year, Rosa Montero will give the inaugural speech of the Pisa Book Festival on Friday Nov. 8 at 11 am.  She will talk about her most famous novel “La loca de la casa” (The Lunatic of the House) and her personal memories in other two meetings at Sala Pacinotti on Nov. Fri. 9 (12 noon) and at the Repubblica Cafè, Sat. 10, at 4:30 pm.  To explore the dark world of the bestselling author of crime fiction, readers can encounter Dolores Redondo, author of “The Invisible Guardian” on Saturday at the Sala Fermi (6 pm). Other Spanish guests are mystery novelists Domingo Villar (Sala Fermi, Sat. 2 pm) and Lorenzo Silva (Sala Pacinotti, Sat. 10, 3 pm). They will join Dolores Redondo in a public conversation on Sunday at the Sala Pacinotti (3 pm).

On Friday, Nov. 9, at the 9:30 pm at the Scuola Normale Superiore in Piazza dei Cavalieri, the verses of Federico García Lorca, the poet murdered during Spain’s Civil War in 1936, will be presented “Nuda canta la notte” (Naked sings the night) by Valerio Nardoni, Selena Simonatti and Juan Carlos Reche, director of the Instituto Cervantes in Rome.

“We are living in a world where dreams are reality and reality is dreams” as the Muriel Spark character in “Reality and Dreams” says, but with this full program, the guest can respond using the Lewis Carroll’s quote “A dream is not reality, but who’s to say which is which!”