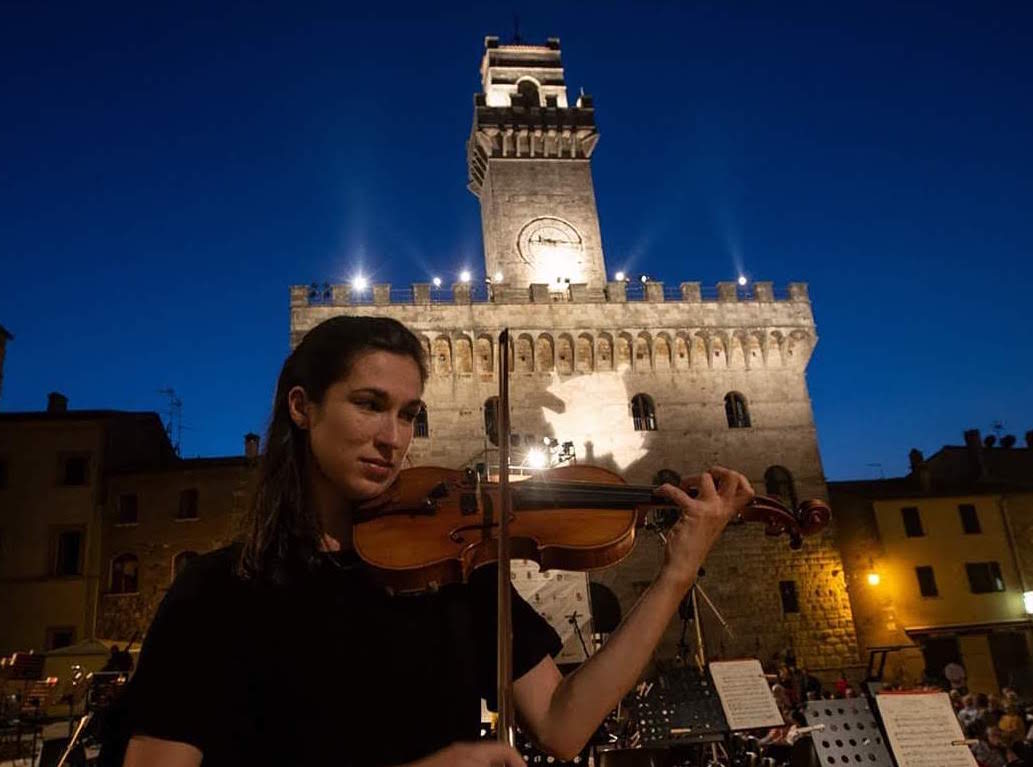 Summer 2020 marks the 45th edition of the “Cantiere Internazionale d’Arte,” a performing arts festival that will also take place as usual in Montepulciano in accordance with safety regulations. The Cantiere has invited musicians and dancers to create art in response to the health emergency under the theme “Chaos and Creation.” Funded in part by the EU, the festival will host symphonies, chamber music concerts dedicated to those affected by COVID, and dance performances from July 24 to August 2 in Piazza Grande. Artists will also celebrate the 250th birthday of Ludwig van Beethoven by interpreting contemporary interpretations of select scores. Tickets range from €1 to €15.

Take a stroll through Montepulciano, enjoying its medieval and Renaissance architecture, delicious Vino Nobile wine, and the surprise of beautiful music. Friday, July 24 will mark the start of the town’s Cantiere Internazionale d’Arte with an inaugural concert at 9:30 pm in Piazza Grande featuring Roland Böer on harpsichord and Daniele Orlando on violin. The night will highlight 17th and 18th century symphonic masterpieces including Le Chaos dalla Symphonie nouvelle Les Éléments by Jean-Féry Rebel, The Four Seasons by Antonio Vivaldi, and Sweet Bird by George Frideric Handel.

Those who stay overnight can catch a night of silent film accompanied by live music on July 25. At 9:30 pm in the Courtyard of the Carceri, the 1902 black and white silent film Le voyage dans la lune by French director Georges Méliès will be screened while pianists and violinists amplify the drama of the short movie. Meanwhile, in Piazza Grande, pianists Leslie Howard and Ludovico Troncanetti will play The Planets by Gustav Holst, keeping in theme with the space motif – a pun on social distancing.

The majority of the festival’s program will focus on music and dance events.  On July 27 the new group SetteinsiemeperPiero, composed of seven musicians. will play Beethoven’s Septet op. 20 at 6 pm in the Courtyard delle Carceri to pay homage to the composer and honor Italian violinist Piero Farulli who founded the Fiesole Music School in 1974. Consider staying for the debut of the Foné Quartet who will perform repertory from Beethoven’s Canzona di ringraziamento at 9:30 pm in the Courtyard of Palazzo Ricci.

If, instead, you wish to catch a dance performance, coordinate your visit to Montepulciano with “Between Heaven and Earth” (Tra Cielo e Terra) in Piazza Grande on Wednesday, July 29 at 9:30 pm. The evening will open with the ballet Le Creation du Monde composed by Darius Milhaud and based on Blaise Cendrars’ work l’Anthologie Negre which describes the creation of the world through African folk mythology. Cristina Peruzzi, director of Montepulciano’s dance school Petite Ecole, will choreograph the ballet while her students perform, and Valentino Zangara directs.

Next on stage will be Claude Debussy’s ballet Le Danse sacrée et danse profane choreographed by Riccardo Buscarini, the winner of various international competitions. Buscarini was commissioned by the Cantiere to honor Debussy’s score which describes nature and solitude through music, inviting the audience to reflect on the importance of human contact after weeks of solitude. The evening will end with Grand Théâtre de Genève dancers Sasha Riva and Simone Repele interpreting Gustav Mahler’s Symphony No. 5, which is also featured in Luchino Visconti’s film Death in Venice. The dancers will adorn long sleeves on their arms to represent a tree reaching towards the sky, reaching for something after the pandemic.

In that same vein, the theme Echi d’istanti invites artist inspiration from social distancing. Instrumentalists Norberto Oldrini, David Graham, and Claus Kühnl in the Ensemble degli Intigrati will deliver their show socially distant from one another in Piazza Grande at 9.30 pm on July 31. Some of the musicians will play on the terrace and tower of Palazzo Comunale, while others will be on a stage in the city center. Oldrini will perform Gravity, an appropriate selection as open space creates a gravitational pull between the musician’s music and those listening. Meanwhile, English musician Graham will play L’ottimista del progresso (The Optimism of Progress). Kühnl envisions a more geometric set up for his Con Suoni e canti which will position two saxophonists and two percussionists at the corners, creating a dreamlike atmosphere that echoes the lingering conditions of the emergency.

There will be multiple concerts dedicated to Beethoven, beginning on July 30 with a grand symphonic show led by the Orchestra della Toscana and Markus Stenz – one of the most sought-after German conductors of our time. The orchestra will perform the overture of The Creatures of Prometheus  –  a ballet written by Beethoven and based on Johann Wolfgang von Goethe’s poetry  – and Sinfonia n. 3 Eroica. During the same evening will be the premiere of contemporary composer Detlev Glanert performing Idyllium, a tribute to German composer Johannes Brahms.

The festival will conclude on August 2 with a closing concert at 9:30 pm in Piazza Grande. The Poliziana Orchestra, composed of young talent from Montepulciano, will open the ceremony, followed by pianist Mariangela Vacatello and violinist Francesco D’Orazio. The performance will transition into the tribute to Beethoven with two excerpts from the The Creatures of Prometheus, Piano Concerto no. 3, and Violin Concerto in D major.

Founded by Hans Werner Henze in 1976, the Cantiere Internazionale d’Arte had welcomed hundreds of artists from around the world to collaborate with local talent for a night to remember in Montepulciano. The city was built as a fortress on a hill with tall buildings and a 50 by 100 ft. empty floor in Piazza Grande, which ironically lends itself to socially distant performances. From chaos, the city has created a spectacular itinerary for locals and visitors alike. For more information and the full itinerary of the 45th Cantiere, check out the website. (elizabeth berry)