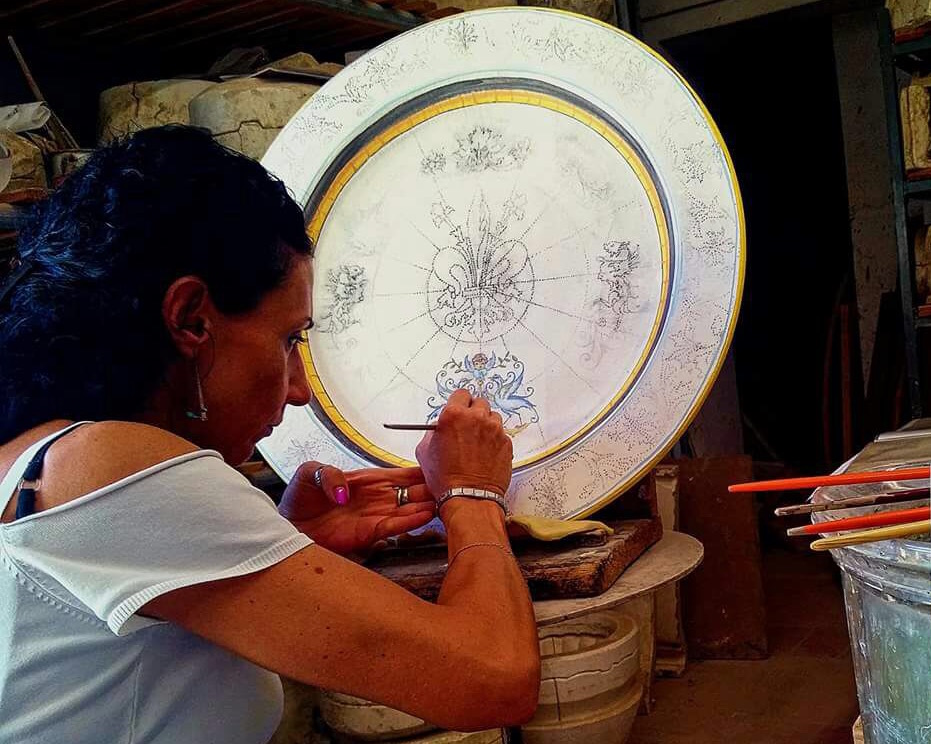 An artisan at work in Impruneta

Buongiorno Ceramica, a two-day event featuring clay and the artisans who work with clay creating beautiful and pragmatic items began in 2015.  This year the national event goes digital with 48 hours of streaming of visits to artisans and artists at 46 designated “ceramics cities” recognized by the Italian Association of Ceramics Cities founded in 1999 on May 16 – 17.

Virtual visitors can enjoy the experience of imagining, creating, shaping, glazing  and firing of a ceramic art piece through photos and video from artists’ studios and workshops plus galleries and museums.  Not only will this allow viewers to see and experience the creative process, it can impart inspiration and support to the many artisans working alone.  The videos will be available for viewing on the association’s YouTube channel.   Buongiorno Ceramica also has a Facebook page depicting their past activities as well as upcoming events.

Terracotta, literally “baked earth” in Italian, has been used throughout history to create sculpture and artistic objects as well as practical items such as cooking vessels, bricks and roofing shingles.   Ceramics, used for fine dinnerware as well as for insulating tiles on the space shuttle, are fired to a higher temperature and tend to be more stable, not disintegrating when placed in water.

The creation of pottery involves all four elements historically believed in Western culture to be essential to life.  Earth, as the clay, or terra, must be dug out of the ground.  Water skillfully blended with the earth, creates the clay making it pliable for the artisan to shape.  Air dries the formed and decorated objects from one day to several weeks to ensure stability when fired.  Fire from wood burning or gas fueled kilns turns the dull grey clay into the rich warm colors of terracotta pottery.

Four Tuscan towns are participating in Buongiorno Ceramica.  Montelupo Fiorentino, famed for ceramics creations from the Middle Ages, seems a natural spot for the manufacture being surrounded by forests with plentiful wood for the ovens and in close proximity to Florence.  It claims the title of the Tuscan home of majolica ceramics.  Majolica, the brightly painted tableware influenced by Moorish Spain, was further adapted by Montelupo artisans to include Renaissance designs.  Traditionally aristocratic Florentine families ordered their dinner service from the craftsmen of Montelupo and artisans created decorative tiles for flooring for the Medici and other wealthy families.  Today ceramics is the area’s most important economic activity and  the city continues the artistic tradition making various pottery ware from elegant Renaissance reproductions to rustic terracotta pots and statues.  Montelupo’s Museum of Ceramics participates in the weekend with videos and images of their collections.

Impruneta, a village 15 km. (nine miles) south of Florence, has been associated with earthenware pottery since the 12th century.  Filippo Brunelleschi chose Impruneta kilns for the production of the flat terracotta tiles that cover the dome of Santa Maria del Fiore in Florence, as this material was both solid and light.  Today vessels, columns and religious sculptures used in the gardens, villas and courtyards of Florence, Siena and Arezzo are crafted from the local iron and copper rich clay that develops a warm reddish finish when fired.  Not thrown on a potter’s wheel the earthenware is created by a unique process with the artist working around the vase giving life through the spiraling action of stacking layers of clay, called in craftsman jargon “snakes.”

Today there are 17 active workshops in Impruneta.  F.lli Masini family works in one of the most ancient, dating from 1681.  Its two kilns are housed in a traditional building with the courtyard displaying pieces of its production.  Ugo Poggi restored an ancient 14th century furnace in 1919 and began making pottery in characteristic styles of the 19th century as well as more contemporary designs.  Today his grandchildren Antonella and Lorenzo Andrei continue the family tradition operating the workplace and obtaining the clay from adjacent land.  The Mariani family operates Fornace M.I.T.A.L. specializing in artistic objects as well as handmade materials for construction and external decoration.  Their workshops produced the large flower planter vases lining Via Tornabuoni in Florence.

The name Richard Ginori, synonymous with the city of Sesto Fiorentino for more than 275 years, commands worldwide appreciation for its fine hand-decorated porcelain.  Founded by Marquis Carlo Ginori in 1735, the company employed ancient ceramics techniques in its workshops and created dinnerware for the royal houses of Europe.  On the occasion of Buongiorno Ceramica the public has the opportunity to discover the steps involved in the creation of fine porcelain.  Sesto Fiorentino today hosts 90 ceramics establishments that continue the ancient tradition in their workshops.

Borgo San Lorenzo in the Mugello Valley north of Florence, known for its artists and poets Giotto, Beato Angelico and Andrea del Castagno, also boasts of a ceramics industry since the 15th century.  In the beginning of the 19th century Piero Alessio Chini established a manufacturing center in the city and passed on his skilled to his five children.  The Chini family continues the tradition with Fornaci San Lorenzo and the kilns of L’Arte della Ceramica.  The designs, known for their rich greens and Eastern influence, can be seen during the weekend in videos filmed at the Museum of Chini Factory.

An ongoing project organized by the Italian Association of Ceramics Cities is coordinated with the Fuping Pottery Art Village in China.  Fuping, a village just a few kilometers from Xian, is known worldwide for its famous terracotta warriors.  The objectives of the project are the promotion of ceramics between the two nations and the improvement of technical and artistic knowledge among potters.   “Ceramics from China and Italy and Back,” began in the fall of 2019 with two groups of Italian ceramicists traveling to China with plans for further traveling relationships between the two countries, but the Coronavirus emergency in China closed down the project in late January.  Portrayals of the first visits to Fuping can be viewed on the Buongiorno Ceramica Facebook page.  (rita kungel)