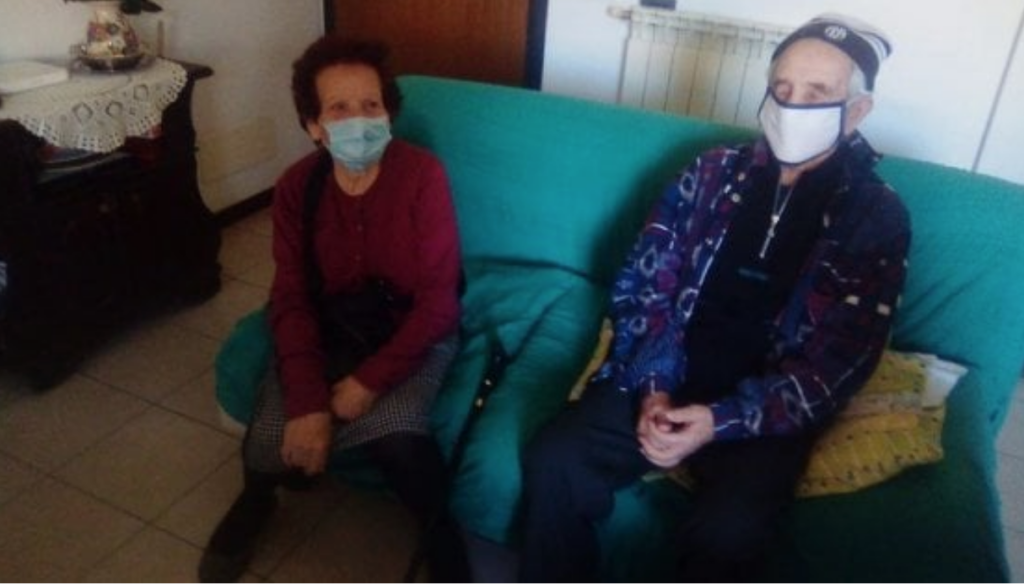 After two and a half months of separation, Lidia was finally able to travel the 200 meters (600 ft.) to Armando’s house. Although the couple remained a safe distance from each other on Armando’s sofa––as shown above––they were excited to be in each other’s physical presence after weeks apart.

Their sacrifice–along with those of many other residents caused by Italy’s mandated Covid-19 lockdown, has helped to make possible the incredible news:  Tuscany is approaching zero contagion.  On May 11, 2020, there were only 13 new cases reported in addition to eight deaths.

Lidia Pallecchi, 86, and Armando Crociani, 93, had never been apart in their 20 years together. Both are from Pienza, in the province of Siena.  They were separated along with thousands of families and couples in order to comply with lockdown imposed by the Italian government to contain Coronavirus. Although Phase 2 of the health regulations still restricts physical contact, Lidia and Armando are now able to keep each other company.

In their youth Lidia and Armando were neighbors, but their lives took different paths. Armando, with five children, became the town’s mechanic and, up until two years ago, repaired bikes of fellow citizens in his free time. Meanwhile, Lidia, married with two girls, was a cook’s assistant in a restaurant where she prepared homemade tagliatelle pasta.

Their love story began 20 years ago, far before the pandemic upset their and thousands of Italians’ routine. Livia’s and Armando’s paths crossed when they met at a club for older people, now both widowed. From that moment on, the two became inseparable. The couple remained in their own homes, but met every day for long walks and to go dancing––until the pandemic.

Before the Covid-19 emergency broke out in early March, Armando visited family in Parma with his son Daniele. When they returned to Pienza on March 7, the town had become a red zone. As a result, father and son were forced into isolation.

While Lidia and Armando waited to reunite, they relied on phone conversations to keep each other company––not having access to a computer or smartphone. This was their new routine, until on Monday, May 4 they were finally able to meet in person again.  (elizabeth berry)