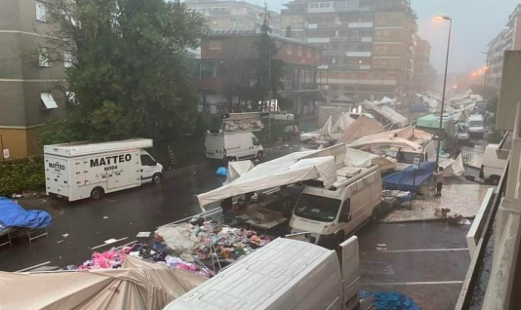 The market in Marina di Carrara devastated by the storm

A state of emergency has been declared in Tuscany by Governor Eugenio Giani due to the consequences of unexpected and extreme weather conditions on August 18.

Damage in addition to several deaths was caused by intense rain and winds reaching 140 kilometers (86 miles an hour).  The state of emergency that will last for six months comprises the provinces of Massa Carrara, Lucca, Pistoia, Prato, Metropolitan City of Florence, Arezzo, Siena, Pisa, Livorno, and Grosseto.

Two people died after being hit by a fallen tree in Carrara and Lucca.  About 100 people have been evacuated from their homes in the municipalities of Massa (30) and Carrara (70).  The Civil Protection Agency has set up shelters for the night in schools and gyms.

Hailstones measuring up to 4 centimeters (1 1/2 inches) in diameter have also caused a negative impact on agriculture in Tuscany, especially on grape vines and olive trees.

Over 27,000 homes were left without electricity and at the moment over 5,500 still remain in the dark, waiting for lines to be repaired.

In Florence, line 1 of the Tramway 1 to Scandicci is out of service due to a fallen tree inside the Cascine Park, and has been substituted by a shuttle bus until repairs on the vehicle can be carried out.  Another fallen tree hit the electronic system of Line 1 at the Strozzi-Fallaci stop.

The Boboli Gardens will remain closed until August 21 to clear fallen trees and branches.

In Bottai’s International Camping Village, a tree fell on a camper where there was a family trapped inside. Fortunately, they were rescued.  A customer of the Galluzzo market in piazza Acciaiuoli was injured by a falling tree branch.

A section of the state road 439 ‘Sarzanese Valdera’ is temporarily closed to traffic in both directions in Lajatico (province of Pisa).  (elif aytemiz)