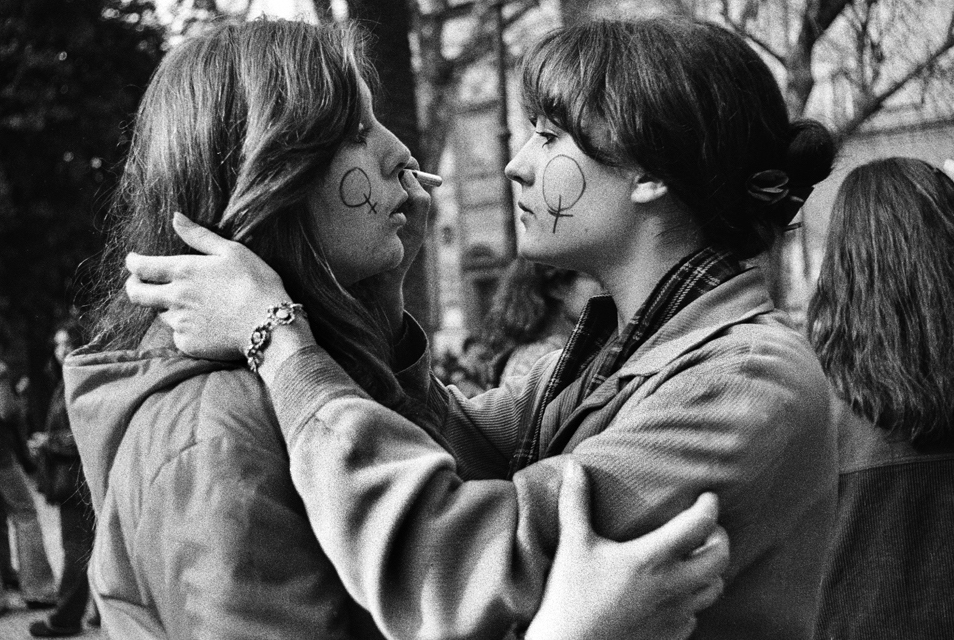 ‘March 8, 1977’ by Paola Agosti at the Centro Pecci. Photo courtesy of Centro Pecci Contemporary Art Center, where the image is being currently displayed as part of the Female Identity Through the Images of Five Italian Women Photographers exhibition until March 8, 2019. See article below to find the link to the image given by the Pecci by the author, copyright Paola Agosti.

Bringing together the work of talented female photojournalists, the Pecci Center in Prato offers the opportunity to experience unforgettable pictures that illustrate Italian life and times through the perspective of those who are often overlooked.

Over 100 exhibits give insight into the lives of women, young and old, telling stories of outsiders, connecting with cultural phenomena including demonstrations and feminism as well as displaying the talent of Italy’s foremost female photographers of the late 20th and early 21st centuries. One of the five artists featured at the Pecci Center, Letizia Battaglia, is further showcased with a one-woman show at Livorno’s Museo Civico Giovanni Fattori with 50 of her incredible images.

Until March 8, 2019: Female Identity Through the Images of Five Italian Women Photographers

Female roles are showcased in this inspiring exhibition, chosen to celebrate the 30th anniversary of the Luigi Pecci Center for Contemporary Arts (viale della Repubblica 277, Prato).  The curator’s aim is to create a platform for diverse voices, which will be echoed by future shows. Spanning over 20 years, from 1965 to 1985, Letizia Battaglia, Marialba Russo, Lisetta Carmi, Paola Agosti, and Elisabetta Catalano portray Italy’s social and political transformations.

Letizia Battaglia achieved fame through her documented perspective of the Mafia through the eyes of women and girls. Born in Palermo in 1935, she began photographing the victims, as well as the lives of females of all ages affected by or involved in Sicily’s organized crime scene.

A young girl’s haunting gaze pulls the audience in: another posing with a soccer ball shows a fierce independence, and still others who are cleaning reveal an insight into daily routines.  Battaglia’s focus on capturing the feminine presence in her shots brought her to the realization that she was “looking for something within my subjects that was broken in myself at that age.” Today her work continues with her involvement in the city of Palermo as the director of the Center of International Photography. She has received numerous awards and honors attesting to her skill, and was even featured in the New York Times 2017 list of the year’s exceptional and powerful women.

Traveler and freelance photojournalist across the globe, Paola Agosti, born in Turin in 1947, documents feminist and political movements. Her photos feature protests, marches, and demonstrations throughout Italy in the ‘70s, showing the struggle of women fighting for liberation of expression and freedom of choice. Agosti became acquainted with a side of Italy, sometimes not always openly feminist but full of female endurance, courage, and energy, all of which are evident in her photos.  Agosti’s photo used to illustrate this article was provided by the Pecci Center, as can be seen here.

In search of the outcasts, the marginalized, the poor, and the different, Lisetta Carmi also sought to understand the world through her lens. Born in Genoa in 1924, she began as a pianist, but during protests in Italy during the 1960s, her heart went out to the people. When advised to stay inside to protect her hands for her musical career, she replied, “If my fingers are more important than the rest of humanity I will stop playing the piano.” Since then Carmi has worked to integrate her musical rhythm into her photography.

Her controversial 1972 series titled The Transvestites, originated after an invitation to a New Year’s Eve party at the home of a trans. Afterwards, she then spent six years living alongside and photographing them. She focused on the concept of female character, and explored her own, stating that it wasn’t “so much about acceptance of a state as about the rejection of a role.”

Elisabetta Catalano, born in 1941 in Rome, explored the world of fashion, entertainment, and social life of Italy from the ‘70s to the present day. Deriving inspiration from the portrait style of the 1500s, she used unique styles, poses, and expressions to reflect the authentic personality, and distinctiveness, of each individual. Her photos published in Vogue France and Vogue America feature subjects who have made important contributions to literature, art, entertainment, and culture.

Delving into the religious rituals and folk celebrations of southern Italy, Marialba Russo focuses on female identity through cultural traditions. Born in Naples in 1947, Russo started her series, Disguise, in 1975. She spent five years photographing the custom of cross-dressing during Carnival celebrations in southern Italy, centered on an attempt to explore beyond gender stereotypes and expectations. All close-ups focus solely on the face, and disguise, of the subject. The striking and intriguing images line a wall, blending into one conceptual exploration of gender roles.

These unique and beautiful images form a collective work of art worth experiencing. The museum is open daily from 10 am to 8 pm, and until 11 pm on Friday and Saturday. Tickets are available for €10 general admission, and €7 for concessions: students, groups, persons over 65 and under 26 years of age, and more.  (nicole grant)