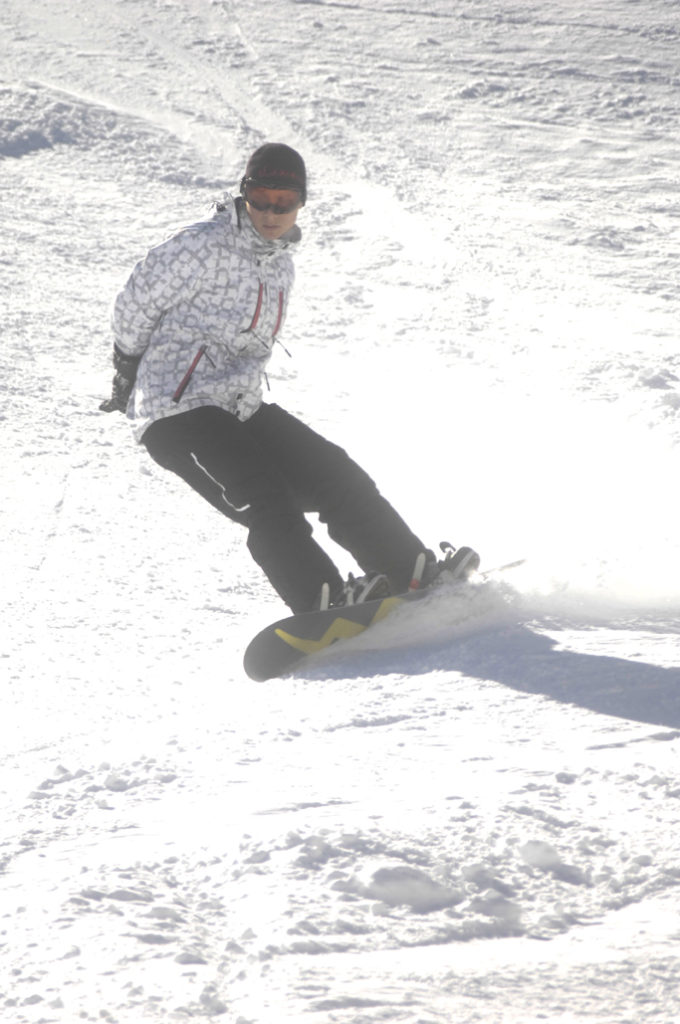 With its snowy slopes and towering pine trees, Abetone is not the typical idea of the Tuscan countryside.  On the short bus ride from the Pistoia train station to Abetone, the terrain changes drastically: olive trees and green rolling hills give way to white scenery accented by the fresh crispness of untainted mountain air.  This resort provides a haven for skiers and snowboarders alike with its groomed and expansive terrain, stretching over the entirety of Mount Gomito as well as the back, an area called the Valley of Light (Val di Luce).

The mountain consists of four valleys, connected by 19 lifts that service the skiers and snowboarders.  This adds up to about 30 miles of trails, which range from groomed slopes to tree-skiing, moguls and large valley bowls.  Abetone can easily be considered as challenging as the skiing in Mammoth, California, or Whistler, Canada, at the fraction of the cost.  With a warm, sunny day, I can honestly say as an experienced boarder that these slopes provided an experience both difficult and exhilarating.  Purchasing a Multipass (29 euro) allows access to all trails, while choosing to ski or snowboard in one valley costs less.

Ovvovia is one of the most popular runs at Abetone, a gondola style ski lift that brings you to the top of the mountain.  Standing on the peak, with the crisp wind blowing over from the Val del Luce, the mix of blue sky and frosty landscape is breathtaking.

On a windy day or a day with low visibility, Abetone can be challenging.  Trails can also ice over, leaving little powder to work with.  When the conditions are good, however, the mountain can offer anything a skier or snowboarder could want.

The trails flow as easily as a river down the slopes.  As a snowboarder, carving through the powder and feeling the ease of controlling the board under my feet, the sunny but cool morning was perfect.  The icy challenge of the day before was gone, replaced with snow that I could actually wield.  I was in the minority as a snowboarder; the majority who take advantage of this Tuscan secret are skiers.  They glided by as fluidly as a rippling stream, coming in trickling waves, sometimes in large groups and other times, just one or two would whip by.

One of the best things about Abetone is its cuisine, hearty mountain food, a soul-satisfying antidote to battling the cold.  After a hard morning of exercise, the polenta with piping hot, creamy porcini mushroom sauce at the La Casina can warm you all the way down to the tips of your chilly fingers.  Located in front of the La Selletta chair lift, La Casina also features a variety of homemade cakes, such as the divine ricotta and pear torte, for dessert.  The Ovovia mountain lodge at the bottom of the hill serves hearty minestrone soup, main courses and healthy salad.

At dinnertime, if a light and airy tagliatelle pasta, an extraordinary vegetable buffet, a good selection of wines and high-class service are craved instead, the restaurant in the Hotel Abetone e Piramidi is the place to go.  The genuine mountain food complements the beautifully restored four-star hotel, founded in 1898.  The site of a former customs house situated on the mountain pass between Tuscany and Emilia-Romagna, Abetone e Piramidi retains many original architectural details.  Stonework and other rustic aspects have been preserved and are found along side by side with modern amenities, making the hotel’s atmosphere both elegant and comfortable.

Abetone is also easily accessible: take a train to Pistoia; right outside this station, the COPIT bus runs several services a day to Abetone (the roundtrip ticket costing about nine euro, the ride lasting about two hours).  There is a direct ski bus leaving from Florence on Saturday and Sundays at 7:10 am, returning from Abetone at 5:15 pm.  Reservations for the ski bus are necessary and are must be made in person at the CAP bus terminal (Largo Alinari 10, near the train station) no later than the preceding Friday at 1 pm.

With good conditions during March and the beginning of April, Abetone is an ideal getaway from Florence, providing some of the tranquility of the mountains but the closeness of Tuscany.  (riana hull)