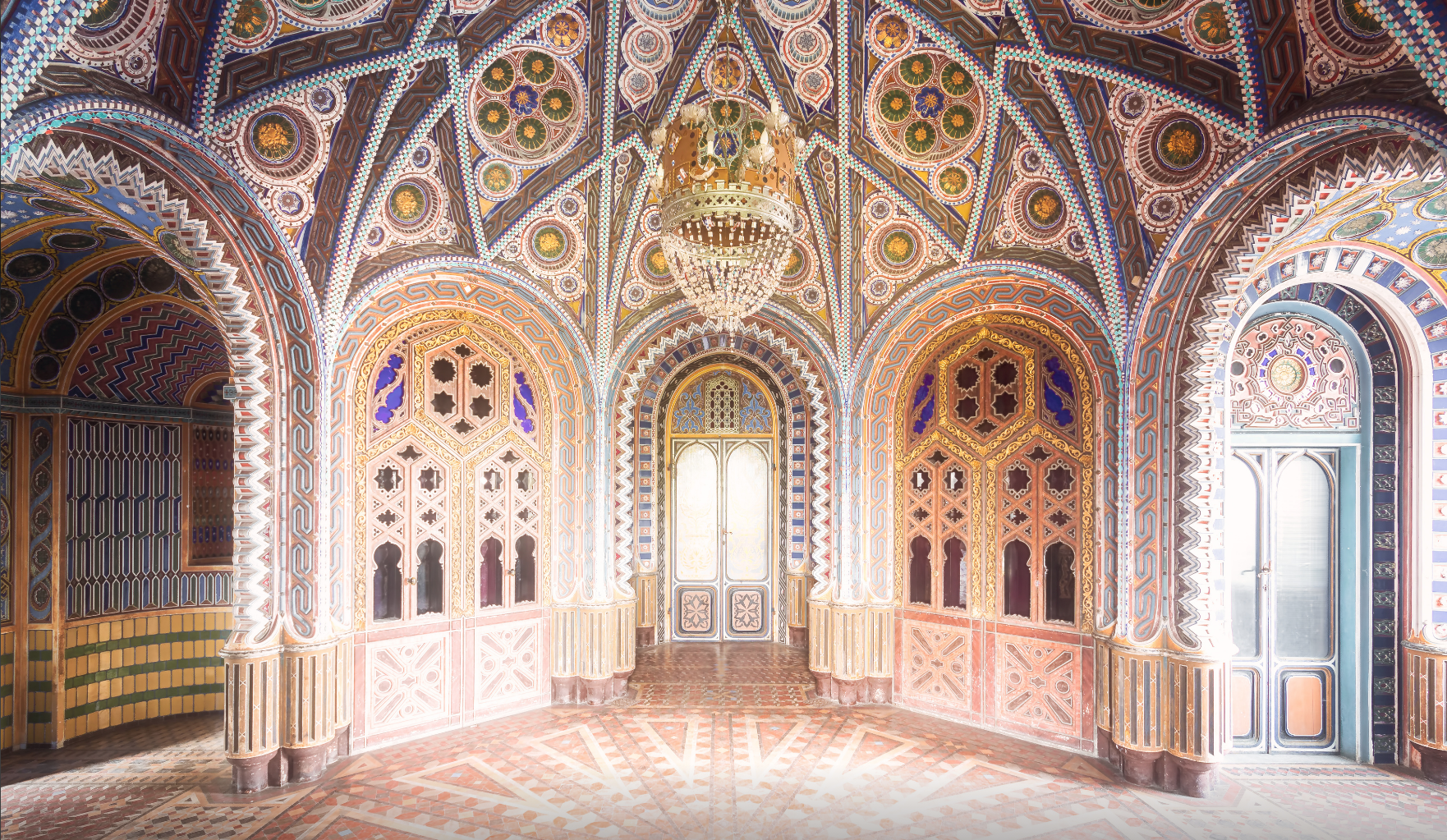 A splendid interior of the Castello di Sammezzano, built in the Moorish style in Tuscany during the 19th century

Just 30 kilometers (18.6 miles) southeast of Florence in the hamlet of Leccio, an architectural marvel sits on a verdant hillside. Sammezzano, a fairy tale castle surrounded by a park of 190 hectares (470 acres), boasts a long history with legends describing that Charlemagne passed by in the 8th century after traveling to Rome to have his son baptized by the pope. In 1796, Napoleon Bonaparte, general of the French army, spent the night in the palace and King Umberto of Italy was hosted by the owner in 1878.

But a glimmer of hope recently shined on the splendid edifice. In February the Fondo Ambiente Italiano (National Trust for Italy) conducted a national poll of “Places of the Heart” to designate endangered sites of the nation’s culture for restoration. Sammezzano came in second. This initiative, as well as a volunteer civic movement “Save Sammezzano,” gives lovers of Italy’s historical heritage optimism that the jewel of Leccio might once again regain its splendor.

A hunting estate during the Medici era, the property was purchased in the 17th century by the Ximenes d’Aragona family, Spanish noblemen. Sammezzano remained in the family with the Marquis Ferdinando Panciatichi Ximenes inheriting the castle in 1816. The marquis, a philanthropist, art collector and horticulturist with architectural and engineering skills and a great imagination, transformed the castle into an exotic Moorish fantasy.

During the 19th century, “Orientalism,” with the imitation of styles and architecture of the Eastern world, became the fashion all over Europe. Chinese pleasure pavilions and miniature Taj Mahals graced the villas of the European and American elite and artists including Eugene Delacroix, Paul Klee and Mary Cassatt embraced styles originating in Asia and North Africa.

Visitors to Sammezzano describe the eclectic building as walking into the kasbah of Marrakech or the Alhambra in Granada, with its rosy coral stucco exterior and interior chambers lavishly decorated with elaborate designs and vivid colors.   The entrance hall, two stories high, flaunts a coffered ceiling and multicolored columns with papyrus capitals, reminiscent of an Egyptian palace. The Great Rotunda with its Moroccan mosaic tiled floors and intricate designs in stark white draw the eyes of the visitor up to inscriptions on the walls “Nos Contra Todos” (us against all) and “Todos Contra Nos,” (all against us).   The Peacock Room, reflects the shape and myriad colors of the gaudy bird, preening for all who enter to marvel at it. With 365 rooms in all, one for each day of the year and each room quite unique, one discovers hidden niches, doorways and arches and inscriptions in Spanish, Latin and Italian, revealing the essence of the designer Panciatichi Ximenes.

He planted hundreds of trees and exotic plants in the park surrounding the palace. Cedars of Lebanon, palms, oaks and California sequoias, including one more than 50 meters high, grew in a whimsical wood amongst fountains, pools, Moorish style decorative terracotta and an artificial cave holding a statue of Venus. All bricks and decorative tiles were made on site by local artisans.

Active politically, the marquis was an advisor for local municipal courts and was twice elected deputy of the Italian kingdom in 1865-1867. But he didn’t hesitate to voice his disappointment about Italy’s situation after the unification. In a niche in a corner of the corridor of stalactites a Latin phrase declares, “I am ashamed to say it, but it’s true: Italy is in the hands of thieves, debt collectors, prostitutes and brokers, who control and devour it. But it is not that, what I am ashamed of, but the fact that we deserve this.”

In the post-WWII period Sammezzano was converted into a luxury hotel, spa and country club, closing in 1990.  The venue provided a setting for works created by filmmakers Pier Paolo Pasolini (“The Flower of the Thousand and One Nights”), Claude Chabrol with “Happy Days in Clichy” and in 2015, Matteo Ganone, who directed “The Tale of Tales” in 2015, starring Salma Hayek and Vincent Cassel, who took advantage of the palace’s unique features.

In the past 25 years, Sammezzano, entangled in a complex ownership situation with bankruptcies and legal disputes, the architectural treasure today lies in a state of decay due to neglect and the elements. A pile of crumbling bricks is all that remains of the once grand staircase, vines grow up the exterior walls and into broken windows and large chucks of pink plaster lie on the ground. Most of the exotic trees and plants have not survived the almost two centuries of neglect and disuse.  But the ranking in the recent FAI poll provides hope that restoration can soon start to save this historical and unique landmark.  (rita kungel)