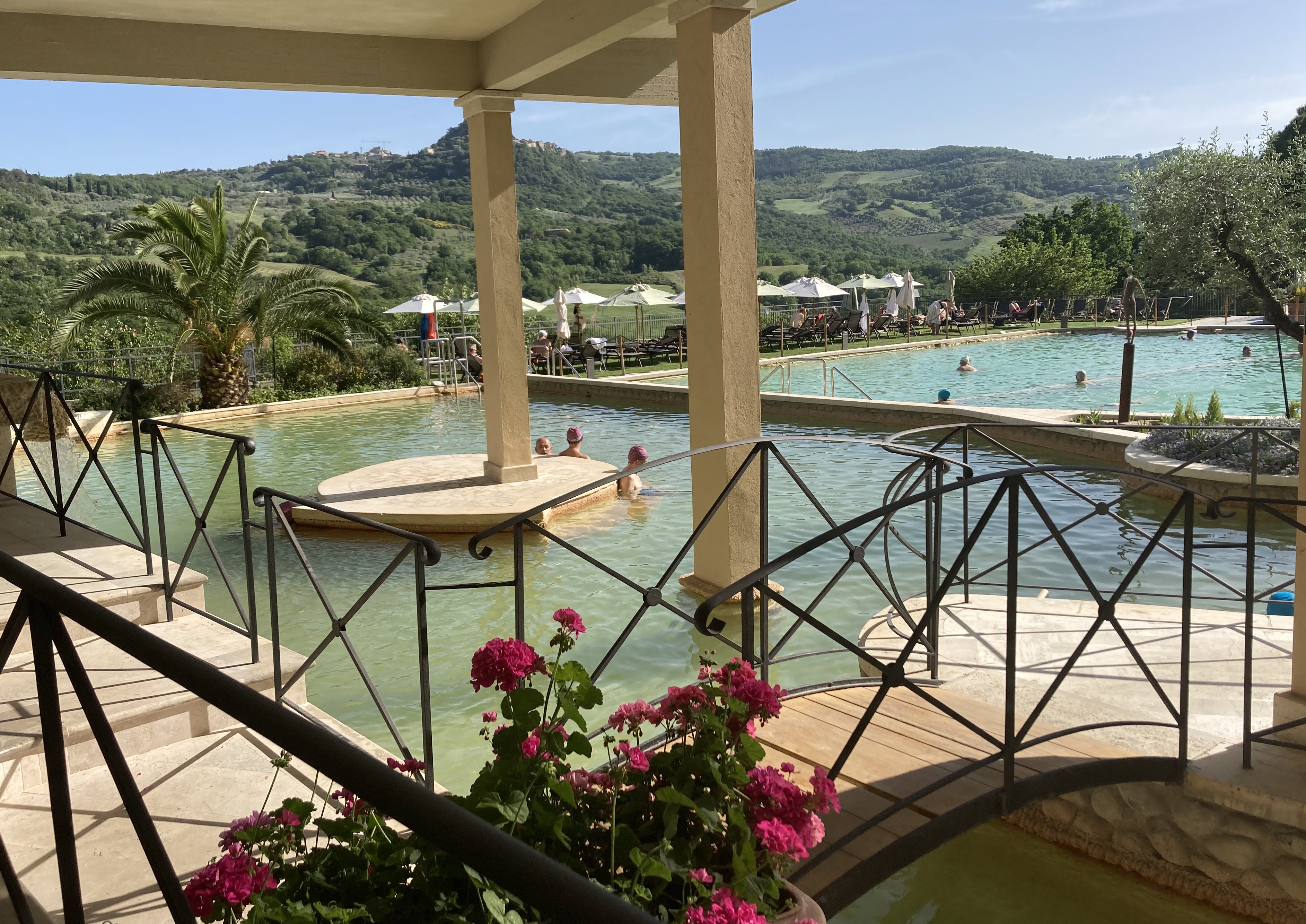 Throughout history the hot mineral springs of Bagno Vignoni have attracted people to come and partake of the healing waters.  The Etruscans and Romans knew from earliest times that the highly mineral rich waters could treat skin ailments, arthritis and what was known as “female problems.”  The waters, hottest in all Tuscany at up to 52C (125F), later drew Pope Pius II, St. Catherine of Siena and Lorenzo de’Medici, known as Lorenzo the Magnificent.

The hamlet, just off the ancient road from Siena to Rome and part of the Via Francigena, was used by pilgrims traveling to Rome from France and England.  No doubt many weary pilgrims passing through availed themselves of the curative waters.

In times past, bathers would have immersed themselves in the large rectangular bath in the historical center of the town.  The ancient pool, a large stone basin, occupies almost the entire central piazza, aptly called Piazza delle Sorgenti.  The loggia on one side is dedicated to the philosopher saint Catherine.  Alongside the basin wall a Roman inscription carved into the travertine proclaims the waters sacred to nymphs and gods.  A 14th century chronicler describes the bath as being surrounded by villas, taverns and a chapel.  Visitors today can find a similar scene with Renaissance period houses, a chapel and cafes affording al fresco dining.

During much of her short life, St. Catherine of Siena was a frequent visitor to town, staying with relatives at the Castle of Rocca d’Orcia just across the valley to the south. A 14th century legend relates that Catherine’s mother had her take the waters at Bagno Vignoni in an ill-fated attempt to cure her of taking the vows.  One hundred years later, Pope Pius II, built a summer home fronting the thermal waters on the main square, and Lorenzo de’ Medici (Lorenzo the Magnificent) spent much of the year 1490 here.  Perhaps the Magnificent was trying to get away from Florentine politics and Friar Savonarola.

A series of mills, built throughout the centuries along the Orcia River now constitute the Parco dei Mulini or the Park of the Mills.  Dug into the rock the mills form a complex hydraulic system that allowed them to operate year-long fed by the constant flow from the original 16th century pool.  Although bathing in the open pools is no longer allowed, the mill works, now completely restored, can be visited to learn about ancient equipment and methods of milling.

Nearby the spring water comes by conduit directly to the Hotel Posta Marcucci.  The hotel grounds contain two pools, one with a relaxing temperature of 28-32 C (82-90F) and the other warmer pool with waters rich in iron, calcium, sulfur and zinc ranges from 35-38C (95-100F).   The hottest water flows from two stone spouts, creating the perfect spot for a liquid neck and back massage.  Set in a large grassy area with loungers and unforgettable views of the Rocca d’Orcia tower on the hilltop, the hotel includes a restaurant, snack bar and comfortable accommodations. Packages with spa services are offered and the resort also welcome day visitors for a fee with reservations.

From Bagno Vignoni, the historic towns of nearby Pienza and Montalcino are easily reached, as well as the general Val d’Orcia area, including the Park of Mount Amiata.  (rita kungel & elizabeth wicks)