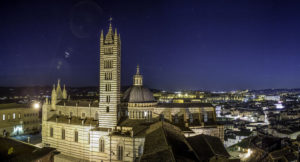 The fifth edition of Lux in nocte brings a documentary premiere in town to celebrate the arrival of the astronomical summer, the summer solstice. The Sky Arte HD-3D work, “Divina Bellezza –  Il Duomo di Siena” (Divine Beauty – The Duomo of Siena) is a tribute to the rich cultural heritage of Siena and particularly its cathedral. The documentary is the result of the fertile collaboration of Moviement HD, director Giovanni Piscaglia, editor Claudio Poli and the narration of Alessandro Haber.

The first event is the performance “In concerto negli Orti” at 9:30 pm. The concert by the Unione Corale Senese “Ettore Bastianini”(Siena Choral Group ”Ettore Bastianini”) who will also give a musical welcome for the symbolic arrival of summer at 10:34 pm according to Italian traditions. At 10:34, the Director of the Opera of Siena, Gian Franco Indrizzi gives a speech, after which the premier screening of Divine Beauty will begin at 10:45 pm.

The programs take place in the Orti del Costone, a temporary green space in the middle of Siena’s historical center. Through September 30, the urban park will be the venue of cultural events and summer programs.

The documentary is a testimony to the historical importance of the town. Once the ancient city-state of Siena was home to one of the most flourishing democracies of the era, marked by and the rivalries with other towns such as Florence, which had the beneficial effect of cultural exchange. This attracted artists to both towns, who were entrusted to eternalize the grandeur of these city-states.

Thanks to this, an astonishing number of masterpieces in Siena that are visible up still today, and Siena’s cathedral is the symbolic representation of a political conflict’s positive effect that resulted in a magnificent landmark.

For the residents of Siena, the cathedral echoes memories of the past: combat at Montaperti, the era of the “Governo di Nove,” the Piccolmini Popes and the fall of the Republic, while hosting works by the best artists of the era such as Nicola and Giovanni Pisano, Duccio di Buonisegna, Donatello, Michelangelo and Raphael.

The film on the cathedral complex shows Siena through the marvelous architectural and artistic works—some dating back as far the ninth century—of eternal beauty created by these geniuses.

The documentary will be aired in the future on national TV’S Sky Arte in HD. (gréta szabó)