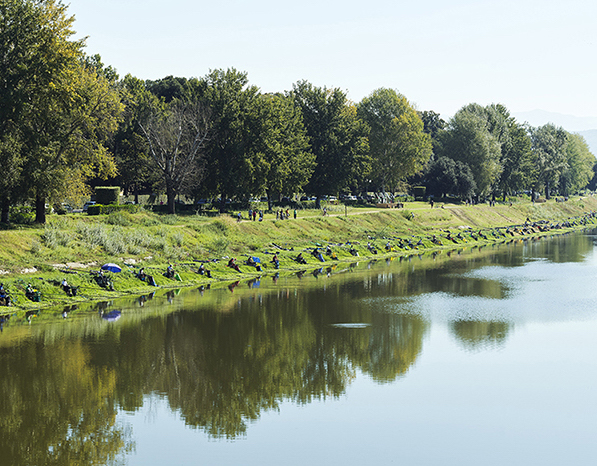 With hopes of putting a stop to the culminating collections of trash in the Mediterranean Sea, the regional council of Tuscany unanimously approved placement of a barrier for plastic in the Arno river. After successful testing on the Po river, the project now continues with the name “Arno d’aMare,” a play on words meaning, “Arno to love.” Once the barrier collects the trash, the waste will be retrieved, sorted, and recycled.

The project is also a part of a public awareness campaign to raise consciousness on environmental issues, including the consequences of plastic pollution. The campaign hopes to involve young people in its mission, with representatives  attending schools to give speeches on alternative products that use less plastic, and are more environmentally sustainable.

The urgency of this project stems from the Mediterranean’s building collection of “plastic islands”. As trash flows into the sea from the rivers, hoards of garbage and waste pile up, creating floating masses, weighing between 1,000 and 3,000 tons polluting the waters. Most dangerous are the microplastics, tiny, barely visible pieces of plastic measuring less than 5mm in size. Often these originate from tire wear, washing synthetic clothing, cosmetics, or any other fragments of plastic material.

These microplastics are harmful to the ecosystem because they are easily ingested by ocean life, and produce harmful chemicals, both of which cause a reduction in fish and other marine life. Microplastics can affect soil where food is grown, water we drink, and the air we breathe, showing that ecological awareness benefits not only the sea but all of humanity. The project works to stop the plastic flow at its source, and lessen the intake of waste overall.