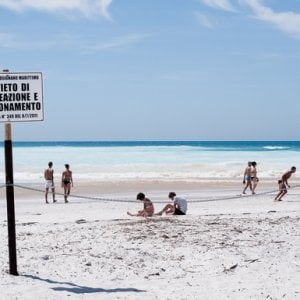 Arpat (Tuscan Environmental Protection Company) has issued warnings about the risk of swimming off Rosignano, the so called, Italy’s ‘Caribbean.’

Many people have enjoyed a day at the beach in Rosignano, a coastal city south of Livorno that is well known for its white sands and supposedly crystal water.  This is not, however, any regular beach. Its artificial appearance is due to the run-off from the Solvay baking-soda factory, a chemical company which has gone on record for its commitment to improving air and water quality.

The problem arises after many fish were found dead on the water’s edge on August 29, during a monitoring by Arpat. The results showed that there might have been an excessive amount of ammonia in the water.

A long stretch of beach – nearly 200 metres (656 ft) now risks closed off, warned the mayor of Rosignano, Alessandro Franchi, until they know for sure what exactly caused the death of so many fish.

According to Arpat the apparent excess of ammonia could be due to a system failure at Solvay, despite the company denying any responsibility.

The fish have been taken to Pisa’s Institute of Veterinary Infective Diseases and Medical Research to examine the cause of death.