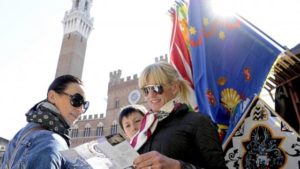 The summer of 2017 will be one to remember for tourism in Tuscany. Compared to last summer, Tuscany had 1.8 million more summer visitors, 4 million including non-recorded visitors. Tourism passed the 4% growth in 2016, an already record-breaking year.

The national average grew 3.7%, including a 5% increase of visitors in the mountains; an untraditional spot for a vacation in Tuscany. Usually, most tourists are drawn to spending their summer by the sea, which rose by 4.8%.

Although September bookings have risen by 20%, the Regional Advisor to Tourism, Stefano Ciuffo said that their work is not finished.

“Now, we need to make Tuscany more attractive throughout the year by creating new travel motives.”

This year also marks the beginning of the end for the recession in Italy.