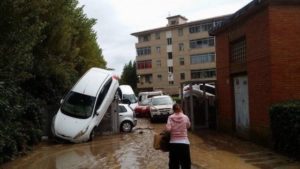 A violent cloudburst caused flooding and eight deaths in the coastal city of Livorno in the early hours of September 10.  Four of the victims, who lived in a basement apartment, were members of the same family: parents, their small daughter, and the grandfather, who had brought another granddaughter to safety before succumbing.

A ninth died in a car accident during the storm.

The streets of Livorno are full of mud and water.  Trains between Pisa, Livorno and all the beach towns to the south has been canceled; the Livorno station is temporarily closed.  Bus service has been instituted between Pisa and Livorno.

There was a dramatic rescue of a young man who sought refuge on a branch outside his home in nearby Ardenza, which was flooded by the river of the same name.

Livorno mayor Filippo Nogarin say that the city was not expecting, and therefore not prepared, for the intensity of the storm which provoked high tides and the overflow of local rivers and streams. It had moved south from Liguria, where there was no damage or deaths.  To read more in Italian, and to see a photo gallery, visit Florence’s La Repubblica news site.  (rosanna cirigliano)