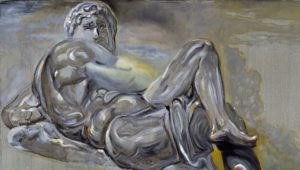 Dedicating his life to reaching artistic immortality, Dalí has left both a physical and intellectual legacy. The Fundación Gala, created by Dalí himself, upholds this legacy by presenting more than 150 of his creations in this exhibition. The Dream of Classicism (Il sogno del classico) is intended to provide a new and unique perspective on Dalí’s relationship with Renaissance art.

In some of these paintings, Dalí is clearly inspired by the masterpieces of Michelangelo and Raphael, and his illustrations are dedicated to Dante Alighieri’s Divine Comedy.

It is clear that he mastered their stylistic techniques and proceeds to incorporate his surreal perspective on the works that he references.  His chosen techniques include the manipulation of brushstrokes, disfigurement of pictorial elements and the invention of new color hues.

These elements provide an insight into many of Dalí’s thoughts regarding the use of color and lines in forming figures and ideas in his works.  The exhibit Eco geologica, draws a direct reference to Michelangelo’s Pieta, a sculpture from the Renaissance, but manages to evoke a completely different feeling by adding dashes of blue brushstrokes throughout the sculpture, which complement the faded blue background. While Dalí keeps the overall frame of the sculpture, he creates gaps within it where he ultimately depicts estranged scenes that allude to oceanic landscapes riddled with large stones and a large sculpture.

Curator Montse Aguer compiled the retrospective by bringing works from several institutions including the Salvador Dalí Museum in Figueres, the Salvador Dalí Museum in Petersburg, and also Vatican Museums.  Dalí enables his works to transcend time by commenting on scientific issues regarding immortality, DNA, and atoms through the use of pointillism.

Strongly influenced by colleagues that were scientists, Dalí conveys his thoughts on basic molecular composition of objects on canvas. His perceived instability of the molecular world can be seen in his depiction of liquids and his disfigurement of objects. For example, In Search of the Fourth Dimension is a compilation of sculptures from the Renaissance, geometric shapes, a clock that resembles a fried egg, and an unbounded landscape

To enrich the visitors’ experience, The Dream of Classism is divided into four main sections. The first narrows the visitors to view paintings created by Dalí after he resided in the United State in the post World War II era.  The second and third sections are dedicated to Dalí’s illustrations based on Dante created in his inimitable way. The last section portrays the artist’s later works, which are expressive and poetic.

The exhibition invites people of all ages to come and do what Dalí did, form their own perspectives and thoughts on the basic composition of life, while still appreciating and building upon past accomplishments. (omar galicia)