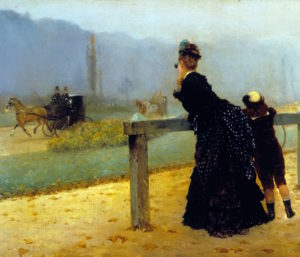 Signorini and De Nittis – two of the most influential illustrators of 19th century Italian society – alongside Silvestro Lega, Zandomeneghi, Boldini and other artists of this period, are the inspirational figures at “L’Ottocento aperto al mondo”  (A 19th Century Window on the World) at Viareggio. Featuring over 40 masterpieces, this extraordinary exhibition tells the story of Italian painting through the eyes of two key art collectors, Enrico Piceni and Mario Borgiotti.

The show, hosted by the elegant Matteucci Centre villa decorated by Galileo Chini, displays work from two private Milanese collections. The first belonged to Enrico Piceni, an influential art collector, critic and translator. Above all, he was a passionate admirer and supporter of the Paris-based Italian artists, including Giuseppe De Nittis, Federico Zandomeneghi and Giovanni Boldini.

The work of De Nittis, one of the protagonists, consists of a series of striking landscapes featuring Italy, France and England. These pieces, including In the Fields Around London (1875) and Date in the Portici Forest (1864), illustrate his masterful command of light and shade and a bold approach to composition.

Al Bois de Boulogne (1873) is perhaps the most representative example of the artist’s work.  This painting demonstrates De Nittis’ ability to depict aspects of everyday metropolitan life.  Focus is drawn to the dark colours worn by the two central figures, creating balance against the soft, pastel background. The lady’s ruffled polka dot dress and the small child’s naval-style outfit immediately bring to mind ideas of elegance, modernity and high society.

The second collection is that of Livorno-born Mario Borgiotti. In terms of contribution to the awareness and appreciation of modern painting, Borgiotti stands in a league of his own. After training in Florence, he soon earned his title as founder of the Macchiaioli, a group of Italian painters active in Tuscany during the late 1800s, who, breaking away from antiquated conventions, produced a great deal of their work en plein air (on-site) much like the French Impressionists.

One of most significant of the Macchiaioli group and another protagonist of “L’Ottocento aperto al mondo” is Florentine artist Telemaco Signorini. Born in the Santa Croce area of the Tuscan capital, his work often depicted Italy as its subject, from archways in Venice and the countryside around Siena to cobbled streets in Riomaggiore.