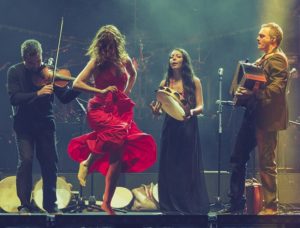 The Cortona Mix Festival is music, film, literature, dance and more, all shaken up in a cocktail of creativity. The town’s streets, piazzas and theatres will come to life in this annual fusion of the arts.

During the festival, concerts, readings, workshops and screenings come together in a celebration of culture in all its forms. Cortona boasts a long artistic heritage: Fra Angelico lived and painted here during the late 14th century and fellow artists Pietro da Cortona and Luca Signorelli were both born here. Enclosed by stone walls dating back to Etruscan and Roman times, this tiny Tuscan gem is perched on top of a hill, offering spectacular views of the surrounding countryside in addition to the cultural agenda.

Cena in Piazza (“Dinner in the Square”) is a happening that combines outdoor cooking shows and music in a celebration of traditional Tuscan cuisine (August 2). Another fusion between sound and food comes in the form of Mix to Mix (August 1). Aimed at young people interested in mixology – both cocktail mixing and music mixing – the workshop includes bartender acrobatics, DJ sets and a cocktail making competition.

Part of Cortona Mix for the first time, HackCortona is a 24-hour team programming contest, where developers and designers compete to create new mobile apps, websites and other tech products. Hundreds of Hackathons take place around the world each year, but HackCortona will be one of the first events of its kind in Italy (August 6-7). Held in conjunction with the city administration, a local bank, and King’s College London’s Tech Society, this competition brings together students and recent graduates passionate about technology from all over Europe to learn, build and exchange ideas (www.hackcortona.com).

Literature is a key ingredient in this year’s mix. In collaboration with the Feltrinelli Group, the lineup features readings and dialogues from a variety of authors – both Italian and international – whose books will be available in the Feltrinelli Bookshop as usual.

Among the authors being interviewed are: 17-year-old sensation Cristina Chiperi, best-selling author of My Dilemma Is You (August 2); Sicilian-born Simonetta Agnello Hornby, who studied English at Cambridge and now lives in London, discussing her new novel Caffè Amaro (August 5); and Nicolai Lilin, author of Siberian Education and Spy Story Love Story (August 7).

Dance is also on the agenda in a unique choreography entitled Secret Pieces. A blend of dance, art and cultural tourism, it takes its audience on a journey through the historic town of Cortona, with improvised performances in various locations. Different versions of the show will take place over two days (August 5-6).

As usual, Cortona Mix offers an exciting film itinerary. Evening screenings include: Marlene Kuntz, the story of a famous Italian rock band formed in the 1990s (August 1); Un bacio (“One Kiss”), an Italian teen drama released earlier this year dealing with themes of homophobia and bullying in schools (August 3); British biographical drama Desert Dancer, based on the true story of a young, self-taught dancer in Iran (August 4), and S Is for Stanley, a film dedicated to the great American director Stanley Kubrick, who won an Academy Award for his work on 2001: A Space Odyssey (August 4).

Music is also on the menu this year, from classical and rock to jazz and electronic.

On August 3, the Orchestra della Toscana (ORT), considered one of the best orchestras in Italy, will perform Mendelssohn, Tchaikovsky and Beethoven. They will be led by Japanese conductor Eiji Oue and accompanied by young violinist Nemanja Radulovic.

Classical makes way for rock on August 4 with a special event called Andrea Chimenti Interprets David Bowie. Joined by the I Nostri Tempi Chamber Orchestra, Chimenti will perform some of the iconic British singer’s greatest hits, including Life on Mars, Space Oddity and Rock’n Roll Suicide.

The program continues the following day with a triple electronic music threat: a workshop will take place in the afternoon with Samuel, the lead singer of electronic rock group Subsonica, joined by DJ Ralf and Federico Grazzini (6:30 pm); live DJ sets will follow (9:30 pm) and a silent disco (12:30 am) will keep the audience dancing late into the night with music blasting through wireless headphones.

Enrico Rava, one of Italy’s best-known jazz trumpeters, takes the stage on August 6. He will be joined by three young talents – Francesco Diodati (guitar), Gabriele Evangelista (double bass) and Enrico Morello (percussion) – together making up the Rava New Quartet. An interview with Rava at 6:30 pm will precede their concert at 9:30 pm.

The festival will conclude on August 7 with a performance from Ian Anderson heading up British rock band Jethro Tull (9:30 pm). Founded in 1967, the group has sold over 60 million albums and performed in over 2,500 concerts worldwide. Piazza Signorelli will come to life in this grand musical finale of rock, folk and blues.