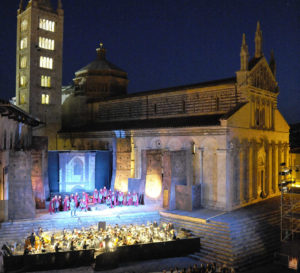 “Lirica in Piazza” celebrating its 31st anniversary, will host three nights of operas in the square outside the 14th century cathedral in Massa Marittima, a small town in the province of Grosseto.

The festival will put on three well-loved operas from August 3-5: “The Barber of Seville,” “Madame Butterfly,” and “l’Elisir d’amore.” Each opera features the Europa Symphonic Orchestra and the Italian Lyric Opera Choir.

“The Barber of Seville” by Gioacchino Rossini, which was premiered 200 years ago in Rome, kicks off the series on August 3. This two-act comedic opera stars Domenico Balzani as Figaro and Patrizia Trigna as Rosina. Giuseppe Acquaviva will conduct the orchestra.

The second night, August 4, offers Giacomo Puccini’s “Madame Butterfly,” which was partly based on John Luther Long’s short story with the same name. The opera premiered in 1904 with two acts, though it has then transformed into a three-act work. An emphasis on costumes and multimedia sets this production apart from traditional performances. Paola di Gregorio will play the role of Madame Butterfly and Antonio Interisano is Pinkerton.

To conclude the festival, Lirica in Piazza will stage “L’elisir d’amore” by Gaetano Donizetti, a two-act play that premiered in 1832. Though light and funny, the performance will also maintain its very romantic aspects, most notable in the opera’s most famous aria, “Una furtive lagrima.” Francesca Salvatorelli has the role of Adina, Matteo Mezzaro will be Nemorino, and the orchestra conducted by Stefano Seghedoni.

The opera series will offer a shuttle bus connecting Mass Marittima with Follonica and Scarlino all three nights. Guests are asked to make reservations for the bus by calling 3311325621. For more information and to purchase tickets, visit www.liricainpiazza.it. (francesca billington)